As Boeing and SpaceX continue working toward the goal of conducting human spaceflight launches in the next few years, NASA announced today that the agency has selected the first four of its astronauts to prepare for the first flights of commercial human spacecraft. The selection begins the familiarization and training process that will eventually see the astronauts riding to orbit and the space station onboard Boeing’s CST-100 and SpaceX’s Crew Dragon.

“I am pleased to announce four American space pioneers have been selected to be the first astronauts to train to fly to space on commercial crew vehicles, all part of our ambitious plan to return space launches to U.S. soil, create good-paying American jobs and advance our goal of sending humans farther into the solar system than ever before,” said NASA Administrator Charles Bolden. “These distinguished, veteran astronauts are blazing a new trail – a trail that will one day land them in the history books and Americans on the surface of Mars.” 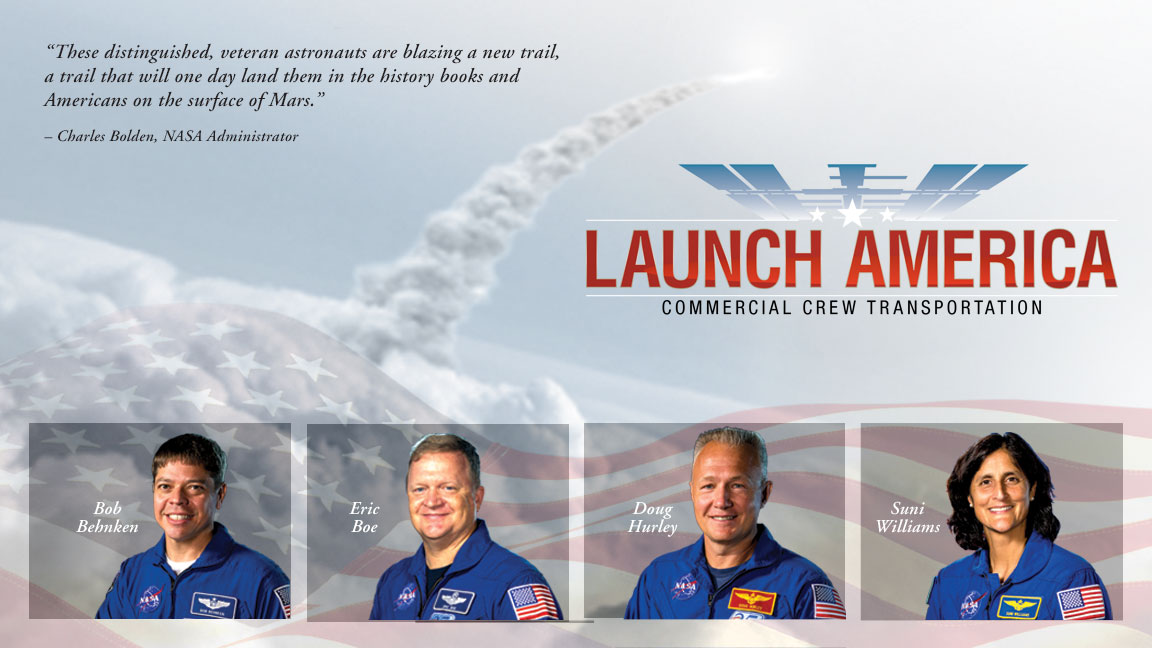 NASA has selected experienced astronauts Robert Behnken, Eric Boe, Douglas Hurley and Sunita Williams to work closely with The Boeing Company and SpaceX to develop their crew transportation systems and provide crew transportation services to and from the International Space Station. Credit: NASA

“Today, NASA announced that it has selected four, veteran astronauts to be the first to fly to space on commercial carriers,” said John Holdren, assistant to the President for Science and Technology and director of the White House Office of Science and Technology Policy. “Their selection allows NASA to move forward with the training necessary to deliver on President Obama’s ambitious plan for returning the launch of U.S. astronauts to U.S. soil, while creating good-paying American jobs, and moving us closer to the President’s goal of sending astronauts to Mars in the 2030s.”

“Congratulations to Bob, Doug, Eric and Suni on being the first group of astronauts selected for flight training as part of NASA’s Commercial Crew Program,” said Gwynne Shotwell, President and COO of SpaceX. “We look forward to working with them even more closely as we prepare for the first human missions to the space station on Crew Dragon. Human spaceflight is why SpaceX was founded, and we look forward to supporting our nation’s exploration efforts by launching astronauts from America again.”

The commercial crew astronauts will work closely with company-led teams to understand their designs and operations as they finalize their Boeing CST-100 and SpaceX Crew Dragon spacecraft and operational strategies in support of their crewed flight tests and certification activities as part of their contracts with NASA. “This is a new and exciting era in the history of U.S. human spaceflight,” said Brian Kelly, director of Flight Operations at NASA’s Johnson Space Center in Houston.

“These four individuals, like so many at NASA and the Flight Operations Directorate, have dedicated their careers to becoming experts in the field of aeronautics and furthering human space exploration. The selection of these experienced astronauts who are eligible to fly aboard the test flights for the next generation of U.S. spacecraft to the ISS and low-Earth orbit ensures that the crews will be well-prepared and thoroughly trained for their missions.”

“We are on a Journey to Mars, and in order to meet our goals for sending American astronauts to the Red Planet in the 2030s we need to be able to focus both on deep space and the groundbreaking work being done on the International Space Station,” Bolden said. “Our commercial crew initiative makes these parallel endeavors possible.  By working with American companies to get our astronauts to the ISS, NASA is able to focus on game-changing technologies, the Orion spacecraft and the Space Launch System (SLS) rocket that are geared toward getting astronauts to deep space.”

The Commercial Crew Transportation Capability (CCtCap) contracts with Boeing and SpaceX each require at least one crewed flight test with at least one NASA astronaut on board to verify the fully-integrated rocket and spacecraft system can launch, maneuver in orbit, and dock to the space station, as well as validate all systems perform as expected, and land safely.

“Congratulations to Bob, Eric, Doug and Sunita and welcome to the Commercial Crew team,” said John Elbon, Boeing Vice President and General Manager, Space Exploration. “We look forward to working with such a highly-skilled and experienced group of NASA astronauts as we carve a path forward to launch in 2017.”

To meet this requirement, the companies also must provide the necessary training for the crew to operate their respective vehicles. NASA is extensively involved with the companies and reviews their training plans.

“We are excited to have such an experienced group of astronauts working with the Commercial Crew Program, Boeing and SpaceX and ultimately flying on the companies’ flight test missions,” said Commercial Crew Program Manager Kathy Lueders. “Naming these astronauts is a key step forward and consistent with past approaches to involve the crew in the design and development of new systems.”

Once the test program is completed successfully, and the systems are certified by NASA, the companies will conduct between two and six crew rotation missions to the space station. Each mission will transport four NASA crew members and at least 220.5 pounds of pressurized cargo to and from the orbiting laboratory.

Robert Behnken is a U.S. Air Force colonel from St. Anne, Missouri, who accumulated more than 1,300 flight hours in more than 25 different aircraft types. NASA selected Behnken as an astronaut in July 2000, and he reported for training in August 2000.

Behnken flew on space shuttle missions STS-123 in March 2008 and STS-130 in February 2010, logging more than 29 days in space, including more than 37 hours during six spacewalks. He earned bachelor’s degrees in physics and mechanical engineering from Washington University in 1992, and a master’s and doctoral degree in mechanical engineering from the California Institute of Technology in 1993 and 1997, respectively. Behnken has served as chief of the Astronaut Office since 2012. U.S. Navy Capt. Chris Cassidy is replacing Behnken as chief of the Astronaut Office.

Eric Boe, also a U.S. Air Force colonel, was born in Miami and grew up in Atlanta. As an Air Force pilot, he flew more than 5,000 hours in more than 45 different aircraft before NASA selected him as an astronaut in July 2000. A veteran of two spaceflights, STS-126 in November 2008 and STS-133 in February of 2011, Boe has spent more than 28 days in space.

While in the Astronaut Office, Boe’s technical assignments included serving as the NASA director of operations at the Gagarin Cosmonaut Training Center in Star City, Russia, and as the deputy chief of the Astronaut Office. He earned a Bachelor of Science in astronautical engineering from the U.S. Air Force Academy in 1987 and a Master of Science in electrical engineering from the Georgia Institute of Technology in 1997.

Douglas Hurley, a retired U.S. Marine colonel, was born in Endicott, New York, and considers Apalachin, New York, his hometown. Hurley retired from the military in 2012 after more than 24 years of service as a Naval aviator who flew more than 4,500 hours in more than 25 different types of aircraft. He also was selected as an astronaut in 2000, and spent more than 28 days in space, flying as the pilot of STS-127 in July 2009 and STS-135 in July 2011, the last flight of the Space Shuttle Program.

Hurley served in several technical assignments within the Astronaut Office including as the NASA director of operations at the Gagarin Cosmonaut Training Center in Star City, Russia. His most recent assignment was as the assistant director of New Programs for the Flight Operations Directorate at Johnson. He graduated with a Bachelor of Science in civil engineering from Tulane University in New Orleans in 1988.

Sunita Williams, a U.S. Navy captain, was born in Euclid, Ohio, and considers Needham, Massachusetts, her hometown. Williams received her commission in the Navy in May 1987 and became a helicopter pilot, logging more than 3,000 flight hours in more than 30 different aircraft. NASA chose Williams for the astronaut program in 1998.

A veteran of two long-duration spaceflights, Williams spent a total of 322 days in space and currently holds the record for total cumulative spacewalk time by a female astronaut (50 hours and 40 minutes). She now ranks sixth on the all-time U.S. endurance list, and second all-time for a female astronaut. She graduated from the U.S. Naval Academy in 1987 with a bachelor of science in physical science, and from the Florida Institute of Technology in 1995 with a master of science in engineering management.

Charlie Bolden also congratulated the most recent additions to NASA’s astronaut corps, the Class of 2013. “I also want to take this opportunity to offer a special word of congratulations to astronaut candidates from the Class of 2013, who are transitioning into flight-ready status.  These eight outstanding Americans – four of them women, four of them men – were selected from a pool of more than 6,300 applicants – our second largest pool of applicants, ever.”

You can learn more about each astronaut by visiting their biographies below:

For the latest information about Commercial Crew progress, follow the blog at:
http://blogs.nasa.gov/commercialcrew

For more information about the International Space Station, visit:
http://www.nasa.gov/station