Piercing a thick layer of clouds that hung low over the lannch pad, A United Launch Alliance Delta IV rocket blasted off from Cape Canaveral on March 25, 2015 and successfully orbited the Global Positioning System GPS IIF-9 satellit efor the U.S. Air Force. Liftoff occurred on time at 2:36 p.m. EDT at the beginning of an 18-minute launch window. After a perfect climb to orbit, the spaceraft separated from the spent Delta IV upper stage three hours after launch.

“Congratulations to the Air Force and all of our mission partners on today’s successful launch of GPS IIF-9! The ULA team is privileged to work with this world-class U.S. government and contractor mission team, and we are proud to contribute to the GPS capabilities that were delivered to orbit today,” said Jim Sponnick, ULA vice president, Atlas and Delta Programs. “This entire team is focused on 100 percent mission success, one launch at a time, and also providing on-time launches to meet our customer’s mission needs.” 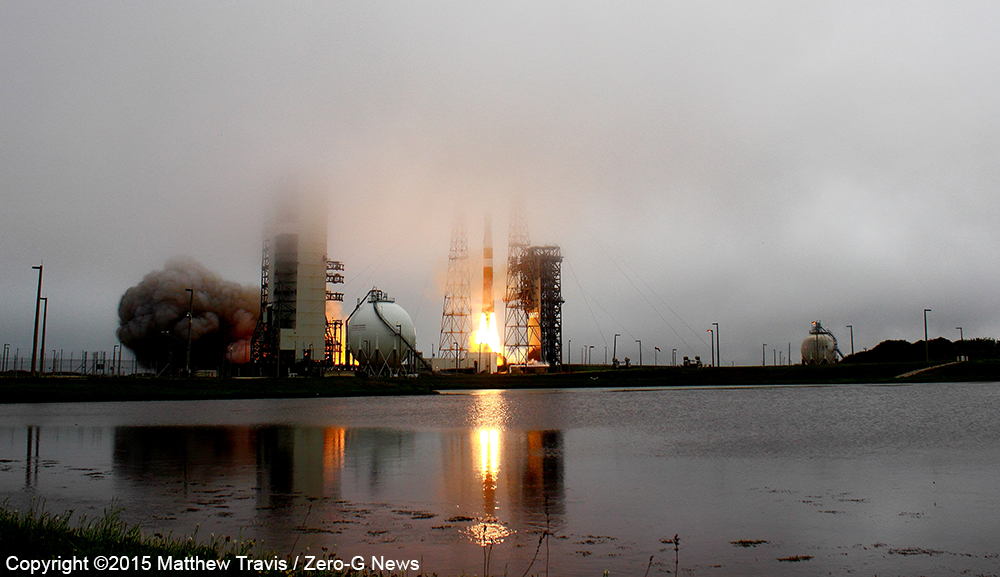 This launch was the fourth for ULA this year and the 95th launch overall since the company was formed in December 2006. The GPS IIF-9 mission was the 29th Delta IV launch and the 57th operational GPS satellite to launch on a ULA or heritage launch vehicle.

Created by the Department of Defense to enhance military warfighting capability, GPS is available for use, free of charge, to anyone with a GPS receiver. U.S. and allied military forces use GPS devices in virtually every system to improve their capabilities and effectiveness while reducing risk to their forces and non-combatants. From finance to farming to tracking packages, use by the civilian community continues to grow rapidly and new commercial applications are continuously being developed.

GPS IIF-9 is the ninth in a series of next generation GPS satellites and will join the GPS worldwide timing and navigation system utilizing 24 satellites in six different planes, with a minimum of four satellites per plane positioned in orbit approximately 11,000 miles above the Earth’s surface. The GPS IIF series provides improved accuracy and enhanced performance for GPS users.

“In over 20 years since the initial operational capacity on Dec. 8, 1993, GPS has never failed to deliver on its global PNT commitment,” said Brig. Gen. Bill Cooley, Global Positioning Directorate director, during a pre-launch media telecom, March 20. “On April 27, we will celebrate the 20th anniversary of achieving full operational capability for GPS.”

The Delta launch vehicle program was initiated in the late 1950s by the National Aeronautics and Space Administration (NASA). The Delta vehicle was developed as an interim space launch vehicle using a modified Thor missile as the first stage and Vanguard components as the second and third stages capable of delivering a payload of 54 kg (120 lb) to Geosynchronous Transfer Orbit (GTO) and 181 kg (400 lb) to Low-Earth Orbit (LEO).

The first-stage CBC is powered by the Rocketdyne RS-68A engine (Figure 1-4), a state-of-the-art engine burning LO2 and LH2 cryogens, capable of delivering 3137kN (705,250 lbf) of sea level thrust and having a vacuum specific impulse of 411.9 sec. The RS-68A can throttle down to 55% of full thrust level in a simple, single-step throttle profile designed to enhance reliability. It features proven technologies with the use of stand-ard materials and minimum part count.

The coaxial injector is derived from the Space Shuttle Main Engine (SSME) and uses low-cost materials and advanced fabrication techniques. The thrust chamber is an innovative Hot Isostatic Press (HIP)-bonded evolution of the SSME design. The engine has a 21.5 to 1 expansion ratio and employs a gas generator, two turbopumps, and a regeneratively cooled thrust chamber. The thrust chamber and nozzle are hydraulically gimbaled to provide pitch and yaw control. 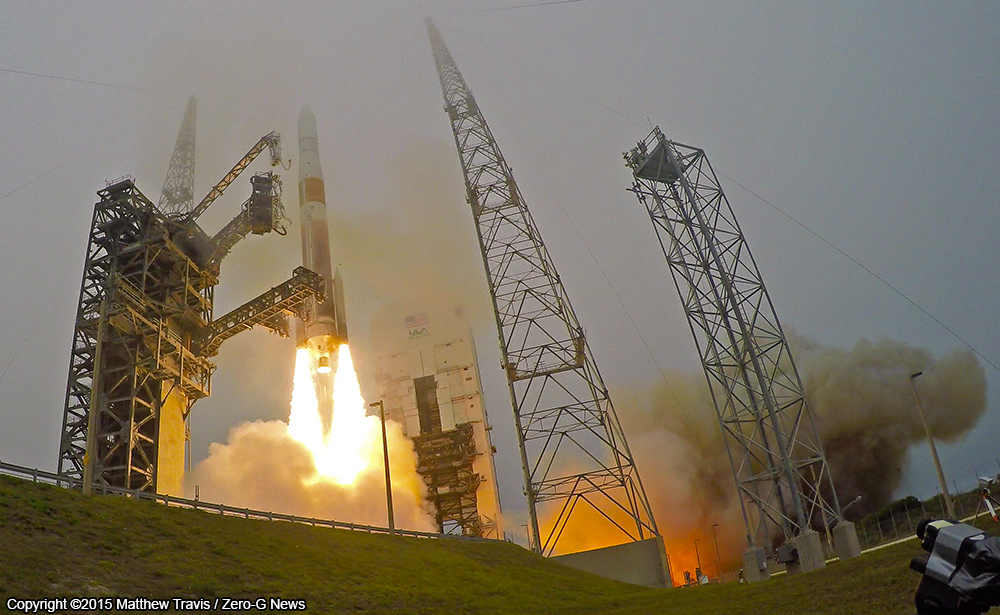 Both second stages use the cryogenic Pratt & Whitney Rocketdyne (PWR) RL10B-2 engine, derived from the flight-proven RL10 family. With an extendable nozzle, this engine produces a thrust of 110 kN (24,750 lb) and has a specific impulse of 465 sec. The engine gimbal system uses electromechanical actuators that provide high reliability while reducing both cost and weight. The RL10B-2 propulsion system and Attitude Control System (ACS) use flight-proven off-the-shelf components. The 4-m second stage has a total propellant load of 20,410 kg (45,000 lb), providing a total burn time of approximately 850 sec.

The Air Force 45th Space Wing team of military personnel, government civilians, and contractors provided support to the ULA launch of the Air Force Space Command mission, including weather forecasts, launch and range operations, security, safety, and public affairs. The 45th Space Wing commander was both proud and pleased with the team she works with here on the Eastern Range. 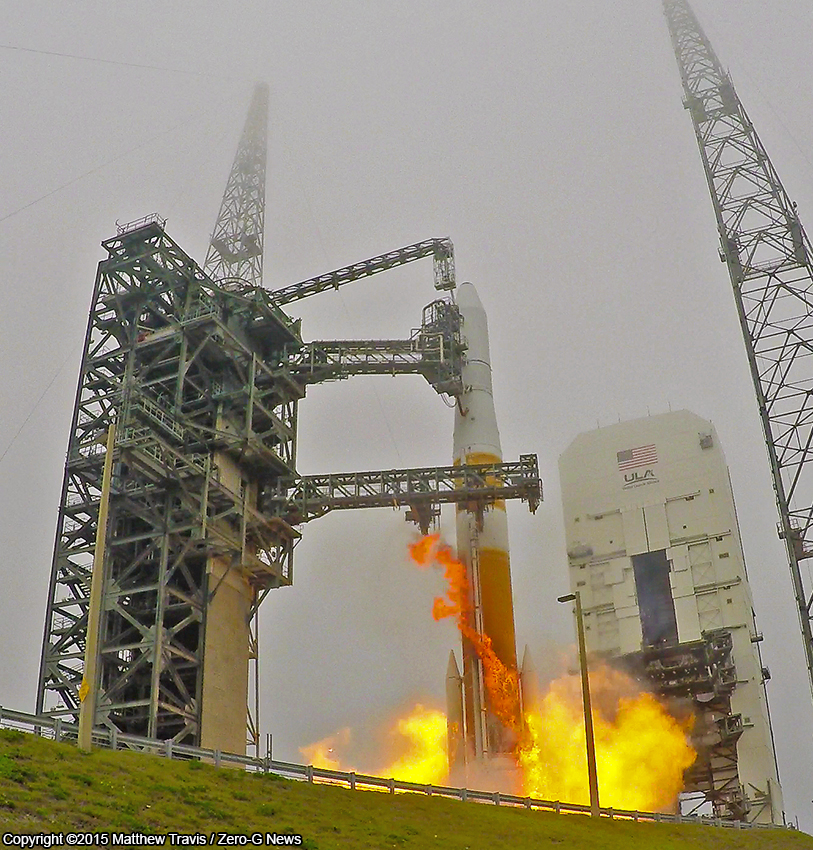 “First, let me offer my heartiest congratulations to ULA, Boeing, Space and Missile Systems Center, the Launch Systems Directorate, the Global Positioning Systems Directorate, and all the mission partners who made this happen,” said Brig. Gen. Nina Armagno, 45th Space Wing commander, who also served as the Launch Decision Authority.

“What a treat — and an honor — it is to know that we have played such a significant part in something that we will celebrate two decades of helping people all around the world,” Armagno said. “Every GPS satellite since the program’s inception has been launched right here from Cape Canaveral Air Force Station safely and reliably by members of the 45th Space Wing.”

“And that’s because we continue to take a ‘one launch at a time’ mentality and focus on our number one priority – 100 percent Mission Success. I am so very proud to be part of Team Patrick-Cape.”

This domain has expired. Is this your domain?

This webpage was generated by the domain owner using Sedo Domain Parking. Disclaimer: Sedo maintains no relationship with third party advertisers. Reference to any specific service or trade mark is not controlled by Sedo nor does it constitute or imply its association, endorsement or recommendation.