With help from NASA, a small research satellite to test technology for in-space solar propulsion launched into space Wednesday aboard an Atlas V rocket from Cape Canaveral Air Force Station, Florida, as part of the agency’s CubeSat Launch Initiative.

The Atlas V sent the U.S. Air Force’s X-37B space plane on its fourth mission, which also is carrying NASA’s Materials Exposure and Technology Innovation in Space (METIS) investigation that will expose about 100 different materials samples to the space environment for more than 200 days.

The X-37B Orbital Test Vehicle is led by the Air Force Rapid Capabilities Office, and is designed to demonstrate reusable spacecraft technologies for America’s future in space and operate experiments which can be returned to, and examined, on Earth.

“ULA is honored to launch this unique spacecraft for the U.S Air Force. Congratulations to the Air Force and all of our mission partners on today’s successful launch! The seamless integration between the Air Force, Boeing, and the entire mission team culminated in today’s successful launch of the AFSPC-5 mission” said Jim Sponnick, ULA vice president, Atlas and Delta Programs.

Col. Thomas Falzarano, 45th Operations Group commander, who also served as the Launch Decision Authority for this mission, thanked Team Patrick-Cape and all of the mission partners who made this launch a success.

“The 45th Space Wing is justifiably proud to play a pivotal role in this very important mission and to partner with the NRO and SMC as we continually join forces with mission partners and lean forward to build the ‘Spaceport of the Future here’ on the Eastern Range,” he said.

This mission was launched aboard an Atlas V 501 configuration Evolved Expendable Launch Vehicle (EELV) , which includes a 5.4-meter-diameter payload fairing. The Atlas booster for this mission was powered by the RD AMROSS RD-180 engine, and the Centaur upper stage was powered by the Aerojet Rocketdyne RL10C-1 engine. This was ULA’s sixth launch of the 501 configuration, and ULA’s 54th mission to launch on an Atlas V rocket.

The Planetary Society’s LightSail satellite is a technology demonstration for using solar propulsion on CubeSats, a class of research spacecraft called nanosatellites. Using the momentum transferred from solar photons as they strike a large, thin, reflective sail would allow a spacecraft to accelerate continuously using only the sun’s energy. NASA is considering the use of solar sails on future exploration mission secondary payloads, and data from this mission will advance understanding of this form of propulsion.

This first LightSail mission specifically is designed to test the spacecraft’s critical systems, including the deployment sequence for the Mylar solar sail, which measures 32 square meters (344 square feet). The Planetary Society is planning a second, full solar sailing demonstration flight for 2016. 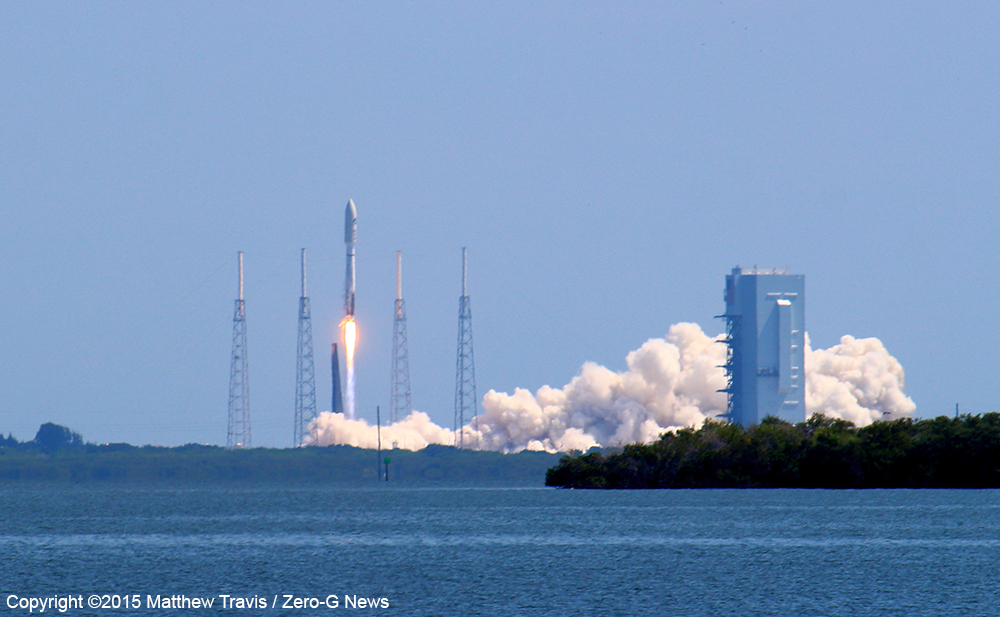 NASA selected LightSail as part of the agency’s CubeSat Launch Initiative, which provides opportunities for small satellites to fly as auxiliary payloads on planned missions. It was assigned to a launch as part of as the 11th installment of the Educational Launch of Nanosatellite (ELaNa) mission.

The upper stage of the Atlas V included the National Reconnaissance Office’s third auxiliary mission to launch CubeSats. The Ultra Lightweight Technology and Research Auxiliary Satellite (ULTRASat) carried 10 CubeSats — including LightSail — from five organizations. It was made possible through agreements between NASA, the Air Force’s Space and Missile Systems Center and the National Reconnaissance Office to work together on CubeSat integration and launch opportunities.

The cube-shaped satellites measure about four inches on each side, have a volume of about one quart and weigh less than three pounds each. LightSail consists of three CubeSats bundled together. Individual CubeSat research projects may address science, exploration, technology development or education. During the next month, the LightSail team will receive data from the satellite in space. As part of its agreement with NASA, the Planetary Society will provide the agency a report on outcomes and scientific findings.

Since its inception in 2010, the CubeSat Launch Initiative has selected 110 CubeSats primarily from educational and government institutions around the United States. NASA will announce the next call for proposals in August 2015.

For more information about LightSail and the Planetary Society, visit: http://sail.planetary.org