The upcoming moon mission at the NASA Wallops Flight Facility will be celebrated at the NASA Visitor Center from 1 to 9 p.m. August 21 through a day of children’s activities, speakers, and observing the sun and moon. All events are free.

The NASA Lunar Atmosphere and Dust Environment Explorer is scheduled for launch on a U.S. Air Force Minotaur V rocket at 11:27 p.m., September 6, from the Mid-Atlantic Regional Spaceport launch pad 0B at the NASA Wallops Flight Facility.
This will be the first launch of the Minotaur V and the first launch beyond Earth orbit from Wallops.

Speakers at 1, 5 and 7 p.m. will take a look at the purpose of LADEE, the experiments on the spacecraft, and Wallops role in the mission.  Each presentation will be about 45 minutes. 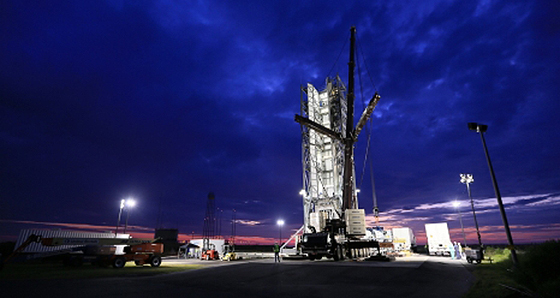 Workers erect the Minotaur V rocket that will carry LADEE on the launch pad at Wallops. Credit: NASA Wallops

Supporting the event, the Delmarva Discovery Center in Pocomoke, Md., will be on site with examples of animals that were involved in space travel. In addition, the Sussex County Astronomy Society in Delaware will set up various telescopes for visitors to view the sun and moon from 5 to 9 p.m.

Data from the LADEE mission will provide unprecedented information about the environment around the moon and give scientists a better understanding of other planetary bodies in our solar system and beyond. In addition, a lunar laser communications demonstration will be conducted with the spacecraft by NASA’s Goddard Space Flight Center in Greenbelt, Md.

For further information on the Visitor Center and the LADEE Celebration call 757-824-1344 or check the web at: http://www.nasa.gov/centers/wallops/visitorcenter/