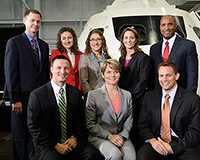 NASA Administrator Charles Bolden on Tuesday formally welcomed the eight newest candidates to the astronaut corps and unveiled a space exploration roadmap that makes clear the global community is working together on a unified deep space exploration strategic plan, with robotic and human missions to destinations that include near-Earth asteroids, the moon and Mars.

At NASA’s Johnson Space Center in Houston, the members of the 2013 astronaut class spoke with reporters about their new roles and their desire to help the agency push the boundaries of exploration and travel to new destinations in the solar system. These next-generation American astronauts will be among those who will have the opportunity to fly on new commercial space transportation systems that are now under development. They also will be among those to plan and perhaps carry out the first-ever human missions to an asteroid and Mars.

“This class joins a distinguished and elite group of Americans who have carried out historic missions to the moon, deployed space telescopes and built an orbiting laboratory the size of a football field, where U.S. astronauts have continuously lived, worked and conducted research for more than a dozen years now,” said Bolden. “They are being asked to carry on this extraordinary legacy and ensure the United States remains the world’s leader in exploration and scientific discovery — carrying with them America’s hopes, dreams and curiosity deep into space, first to an asteroid and one day on to Mars.”

The 2013 astronaut candidate class comes from a pool of 6,000 applicants, the second largest in NASA history. Half of the selectees are women, making this the highest percentage of female astronaut candidates ever selected for a single class. The group will participate in extensive technical training at space centers and remote locations around the world to prepare for missions beyond low-Earth orbit.

The shared global vision, as laid out in the GER, includes:

For more information about the astronaut candidates, their photos and details on the astronaut selection process, visit: http://www.nasa.gov/2013astroclass

For information about NASA and human exploration, visit: http://www.nasa.gov/exploration