Sunday’s loss of the 19th Falcon 9 rocket on its seventh mission to deliver cargo to the International Space Station has left SpaceX searching for answers and facing a potentially months-long grounding of its flagship launch vehicle. Complicating matters for the ISS program, the loss of the Dragon CRS-7 spacecraft follows on the heels of the failure of the Russian Progress 59 cargo craft two months ago, last October’s destruction of Orbital ATK’s Cygnus Orb-3, and the retirement of the European ATV.

“We will work with and support SpaceX to assess what happened, understand the specifics of the failure and correct it to move forward,” NASA Administrator Charlie Bolden said in a statement following the launch mishap. “This is a reminder that spaceflight is an incredible challenge, but we learn from each success and each setback. Today’s launch attempt will not deter us from our ambitious human spaceflight program.” 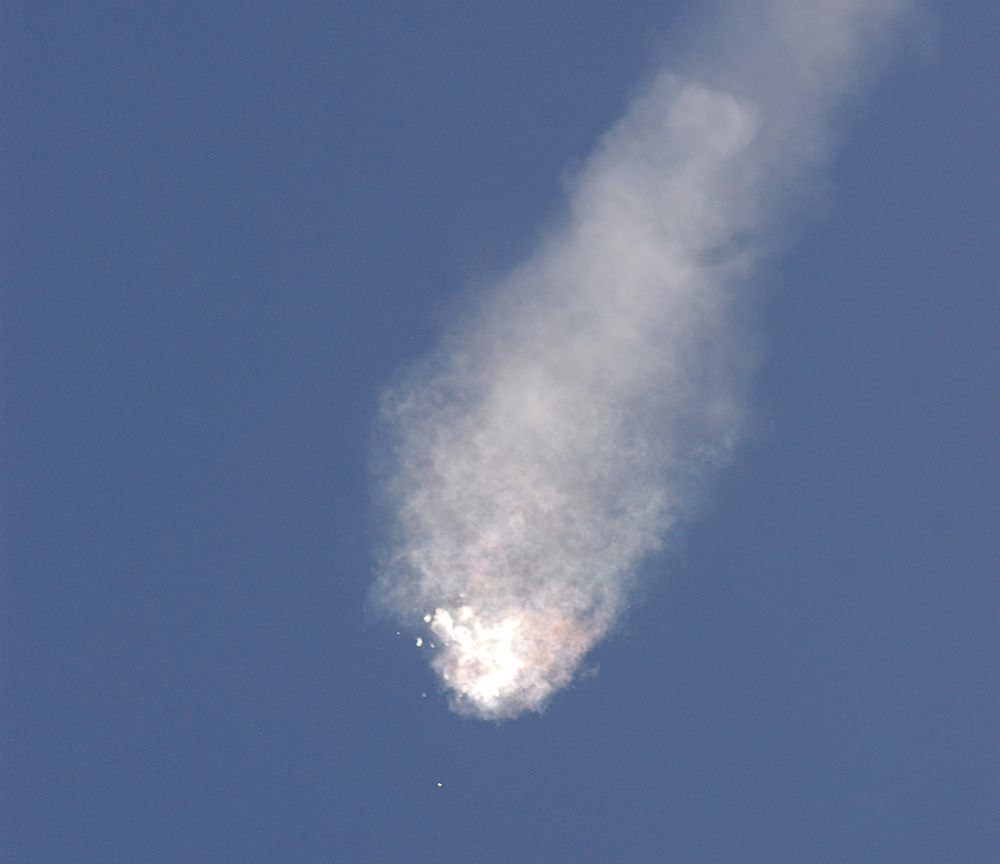 What appear to be pieces of the vehicle falling away from the
expanding plume indicate the beginning of catastrophic vehicle
breakup. Photo Credit: NASATech.net

After a textbook countdown, the Falcon 9 launch vehicle roared into a clear morning sky over Cape Canaveral right on time at 10:21 am EDT. Everything appeared normal for the first two minutes of flight as the rocket arced over the ocean on a northeast trajectory headed toward a rendezvous with ISS.

Two minutes, nineteen seconds after launch, the rocket was enveloped in a cloud of white vapor which turned out to be the second stage liquid oxygen tank rupturing, followed by disintegration of the stage itself. The Dragon capsule, no longer structurally connected to the rest of the rocket, broke free and could be seen in live video falling away from the doomed vehicle.

The first stage continued to thrust forward engaged in a futile attempt to maintain stability before aerodynamic forces overpowered the control system as the rocket turned sideways into the airstream and was subsequently ripped to shreds.

SpaceX President Gwynne Shotwell reported that the Flight Termination System was not engaged during the mishap. Several hours later, officials with the 45th Space Wing Range Safety office clarified the situation. The FTS was triggered, but only after the vehicle had broken up.

Seventy seconds after the Falcon’s destruction, the Range Safety Officer sent the destruct command per standard procedure. While the command destruct system wasn’t required to destroy the rocket to protect the public (the rocket had already destroyed itself), the procedure calls for the system to be triggered to dispose of the live ordnance and prevent it from falling into the ocean or on land where it would present a hazard to the public.

Debris from the Falcon breakup at an altitude of 150,000 feet impacted the ocean approximately 50 miles northeast of Cape Canaveral and began to drift northward along the Gulf Stream. Air Force and Coast Guard personnel immediately set to work to locate and track the floating wreckage and warned the public on water and land to avoid contact with any debris and report findings immediately.

“The anomaly occurred over the Atlantic Ocean and as a result of tide movement over the next several hours, debris may begin washing ashore. If you spot debris in the water or see it washed up anywhere along the Eastern Florida shore report it to either NASA’s debris reporting hotline at 321-867-2121 or Patrick Air Force Base at 321-494-7001 or contact your nearest local law enforcement official. Do not attempt to pick it up or make cell phone calls near it. Gather all information that clearly identifies its location of the debris but only do so after leaving the area. Some of the debris may be toxic or explosive in nature and may be potentially hazardous, which is why it needs to be reported to and handled by trained professionals. Additionally, please keep in mind that all debris is considered part of an official investigation.” – 45th Space Wing

Early indications were that the rocket’s first stage performed nominally and it was quickly exonerated as the source of Sunday’s failure. Just before the vehicle began to break apart, telemetry showed a rapid rise in the internal pressure of the liquid oxygen tank on the second stage. According to Elon Musk, there was no other data to suggest an anomaly.

“There was an overpressure event in the upper stage liquid oxygen tank. Data suggests counterintuitive cause,” Musk remarked on Twitter shortly after launch.

Monday morning, Musk tweeted again, confirming no defeinitive cause of the accident had been found. “Cause still unknown after several thousand engineering-hours of review. Now parsing data with a hex editor to recover final milliseconds,” Musk said in an early morning statement on Twitter.

In addition to pressurized cargo, tucked away inside Dragon’s unpressurized trunk was the first International Docking Adapter to enable future commercial crew vehicles to dock to the station. Loss of the IDA deals a blow to NASA’s Commercial Crew Program, whose Crew Dragon and Boeing CST-100 spacecraft are to use the adapters to hook up to the station. NASA currently has two – now just one – and spare parts that will be used to assembly a replacement for IDA-1.

In a sad twist of fate, Dragon was also carrying a re-flight of high school student experiments that were lost during last year’s Antares mishap. During a post-launch press conference, NASA officials vowed that the experiments will one day reach ISS.

“This loss will certainly be a challenge for them, but this is also a learning experience for those students and for all of us,” said NASA’s ISS Pogram Manager Mike Suffredini. 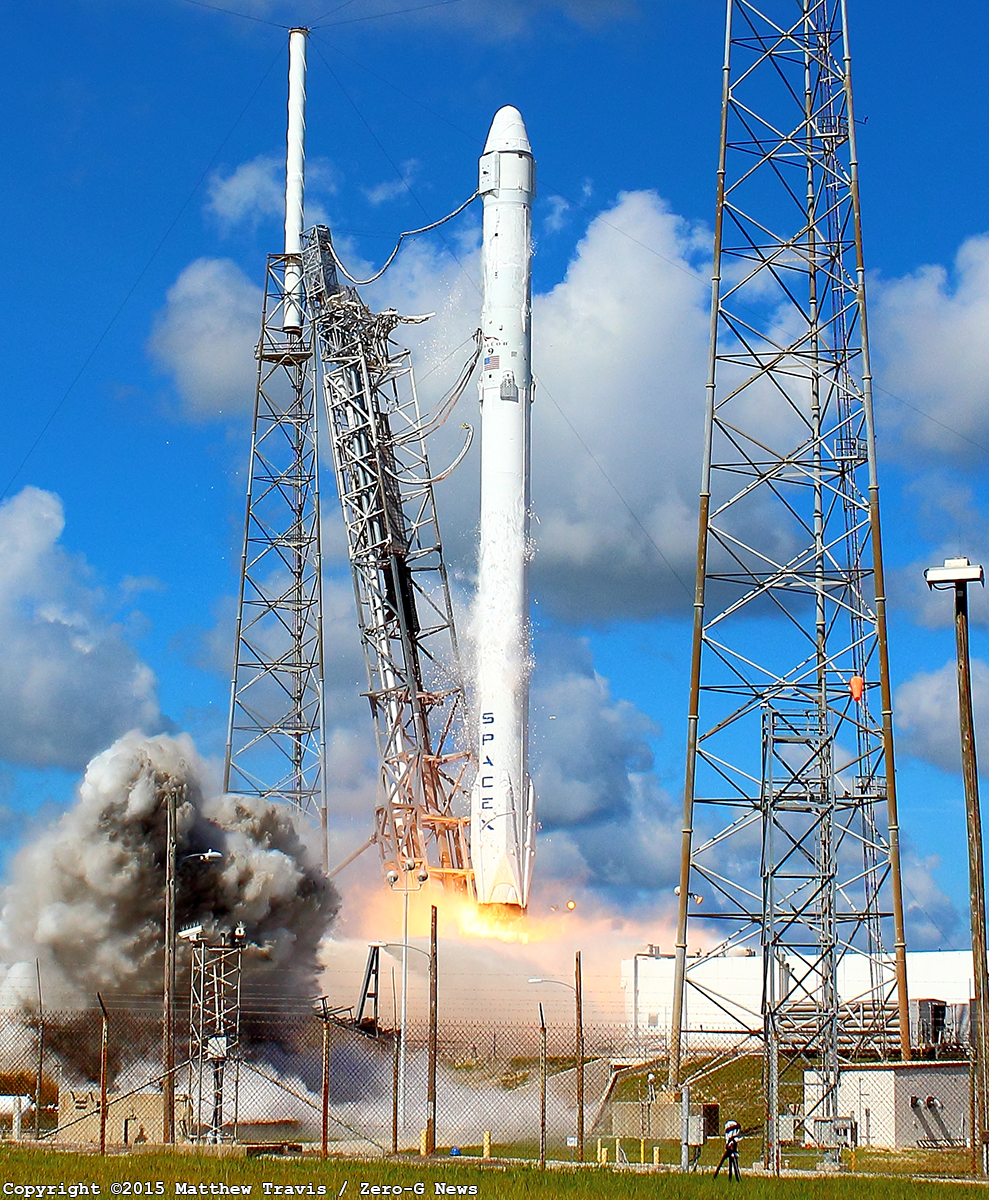 Despite the loss of supplies, the station crew is in no danger and has enough supplies to last at least several months. ISS managers are confident operations onboard the outpost can continue unabated and there’s no consideration being given to reducing the crew size. That sentiment is bolstered by the fact that several cargo supply runs to ISS are still on schedule later this year.

“The commercial cargo program was designed to accommodate loss of cargo vehicles,” said Bolden. “We will continue operation of the station in a safe and effective way as we continue to use it as our test bed for preparing for longer duration missions farther into the solar system.”

“Having three (failures) this close together is not what we had hoped for,” Suffredini said. “Fortunately we had put ourselves in a position where we had quite a bit of logistics on board to support the crew.”

Next Friday, the Russian Progress will return to flight two months after its last mission ended in failure. Progress 60 will launch early Friday morning, U.S. Eastern Time, riding on an older version of the Soyuz rocket that failed during its previous launch.

In late August, The Japanese HTV-6 will fly from Tangegashima Island to deliver more cargo and precious water to the station. Finally, Orbital ATK’s Cygnus will return to flight 14 months after its Antares carrier rocket exploded seconds after launch from Wallops Flight Facility in Virginia. Cygnus will be carried aloft by a United Launch Alliance Atlas V rocket since the upgraded Antares won’t be ready to fly for a few more months.

The Cygnus Orb-6 mission may be advanced up to two months due to the SpaceX failure.