As the company continues to recover from October’s spectacular launch failure of the  Antares medium-lift launch vehicle, Orbital Sciences Corporation announced that it has signed a contract with United Launch Alliance to conduct one and possibly two cargo resupply missions to the International Space Station using ULA’s Atlas V. The Atlas launch vehicle, with a perfect mission success track record, will loft Orbital’s Cygnus spacecraft next year as a stop-gap measure to ensure Orbital is able to fulfill its NASA Commercial Resupply Services (CRS) contract while continuing to return Antares to operational status.

“We could not be more honored that Orbital selected ULA to launch its Cygnus spacecraft,” said Jim Sponnick, vice president, Atlas and Delta Programs. “This mission was awarded in a highly competitive environment, and we look forward to continuing ULA’s long history of providing reliable, cost-effective launch services for customers.”

Following the fiery explosion of the company’s Antares Orb-3 mission on October 28, Orbital announced an initial go-forward plan which included one or two gap-filler launches from a different launch provider. Observers speculated the leading candidate to be SpaceX’s Falcon 9. However, several factors appear to have favored rival ULA.

One of the challenges weighing against Cygnus flying on SpaceX’s flagship ELV is the difficulty inserting new missions into what is already a loaded Falcon launch manifest, particularly considering most of the company’s planned launches for 2014 have slipped into next year. Additionally, it would have pressured SpaceX’s own ISS resupply manifest. As NASA’s other commercial resupply provider, SpaceX delivers cargo to the space station using its Dragon capsule which relies on Falcon 9 for its ride to orbit. 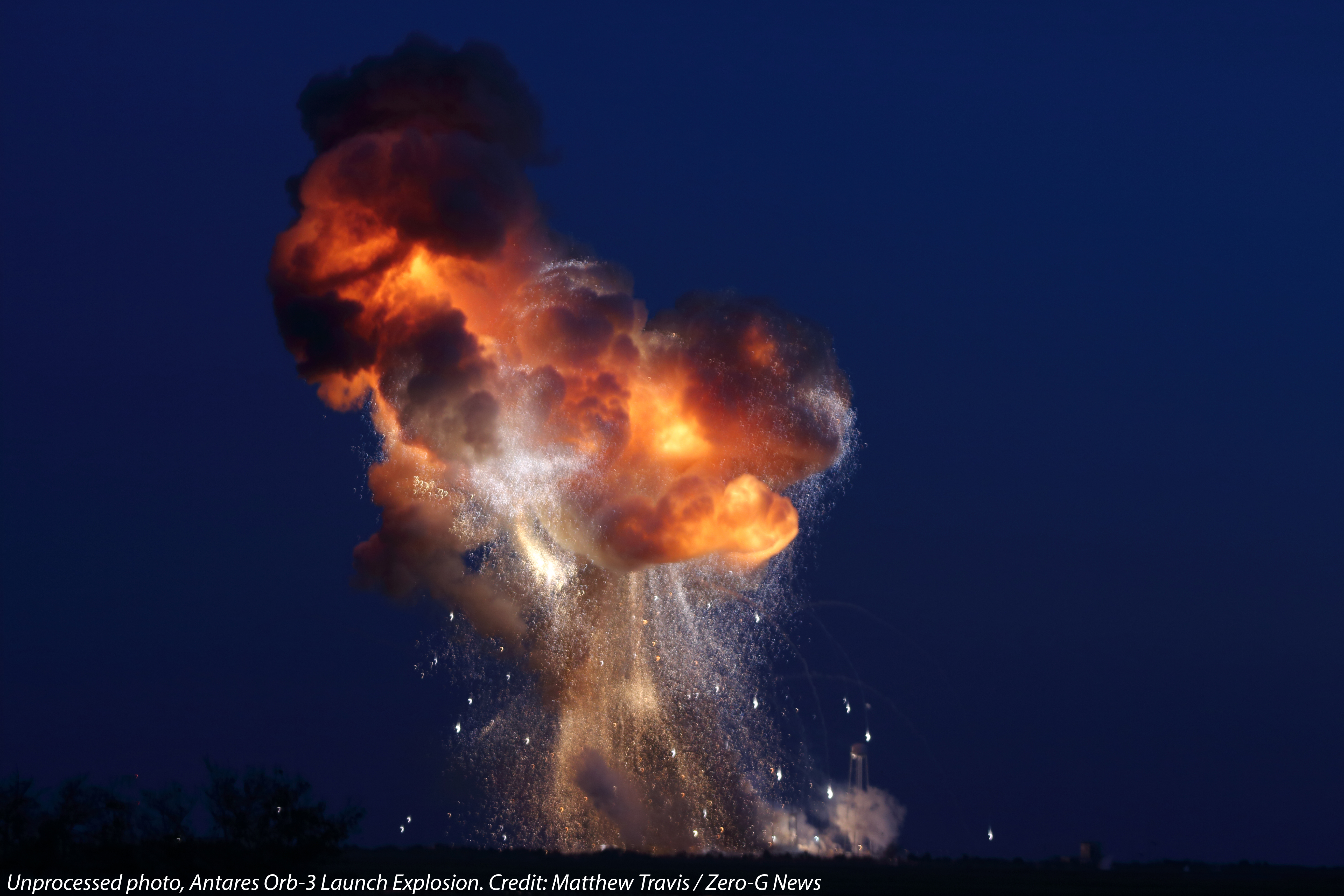 Perhaps an even more important consideration is NASA’s stated desired to avoid the “eggs in one basked” syndrome where one launch vehicle is responsible for all of the United States’ space station resupply launches. A primary objective of selecting two Commercial Resupply Services contractors was to avoid that circumstance in the first place. While NASA has not stated as so publicly, the potential for a failure of the Falcon 9 grounding both Dragon and Cygnus may have been considered an unacceptable risk to the space agency.

Practically speaking, that leaves United Launch Alliance as the only U.S.-based company with the capability to loft Orbital’s craft.

The first mission is set to lift off in the fourth quarter of 2015 aboard an Atlas V vehicle from Space Launch Complex 41 at Cape Canaveral Air Force Station in Florida. Cygnus will fly on the Atlas 401 variant of the launch vehicle, the least powerful version featuring a 4-meter payload fairing and no solid rocket boosters.

The Atlas rocket’s greater lift capacity will allow Cygnus to carry nearly 35% more cargo to the ISS than previously planned for CRS missions in 2015.

If required by Orbital, the second mission would be targeted for 2016.

Orbital’s recovery plan also includes a major upgrade to the main propulsion system of the Antares launch vehicle. Already planned as a future upgrade, the Orb-3 failure forced Orbital to fast-track those plans, aiming for a return to flight within two years.

Today’s update to their go-forward plan reinforces Orbital’s ability to accelerate the introduction of a new main propulsion system for the Antares rocket and has scheduled three additional CRS launches in the first, second and fourth quarters of 2016 using the upgraded vehicle.

The company has yet to publicly announce what rocket engine it has selected to replace the ill-fated and “fundamentally” unreliable Russian heritage Aerojet AJ-26 but acknowledged it will not have a solid propellant first stage. Recent comments by officials at ATK, with whom Orbital is merging, indicate the selection of another Russian-made engine due to the near and mid-term unavailability of new American-made systems.

Many industry observers expect Orbital’s decision to include the adoption of the RD-181 (also known as the RD-193) single-nozzle version of the RD-180 that currently powers the Atlas V. Antares would be fitted with two RD-181 engines, resulting in a significantly more powerful rocket than the original vehicle.

The greater payload performance of the upgraded Antares will permit Cygnus spacecraft on each of these missions to deliver over 20% more cargo than in prior plans. With necessary supplier contracts now in place, the first new propulsion systems are expected to arrive at the Antares final assembly facility at Wallops Island, Virginia in mid-2015 to begin vehicle integration and testing.

Meanwhile, cleanup and repair work continues at the Antares launch complex at the Mid-Atlantic Regional Spaceport on Wallops Island, Va. MARS has assessed the clean-up, repair and reconstruction work necessary to return the Wallops launch complex to operational status with the goal to complete repairs by fourth quarter 2015 and recertification of the launch complex by the end of the year. 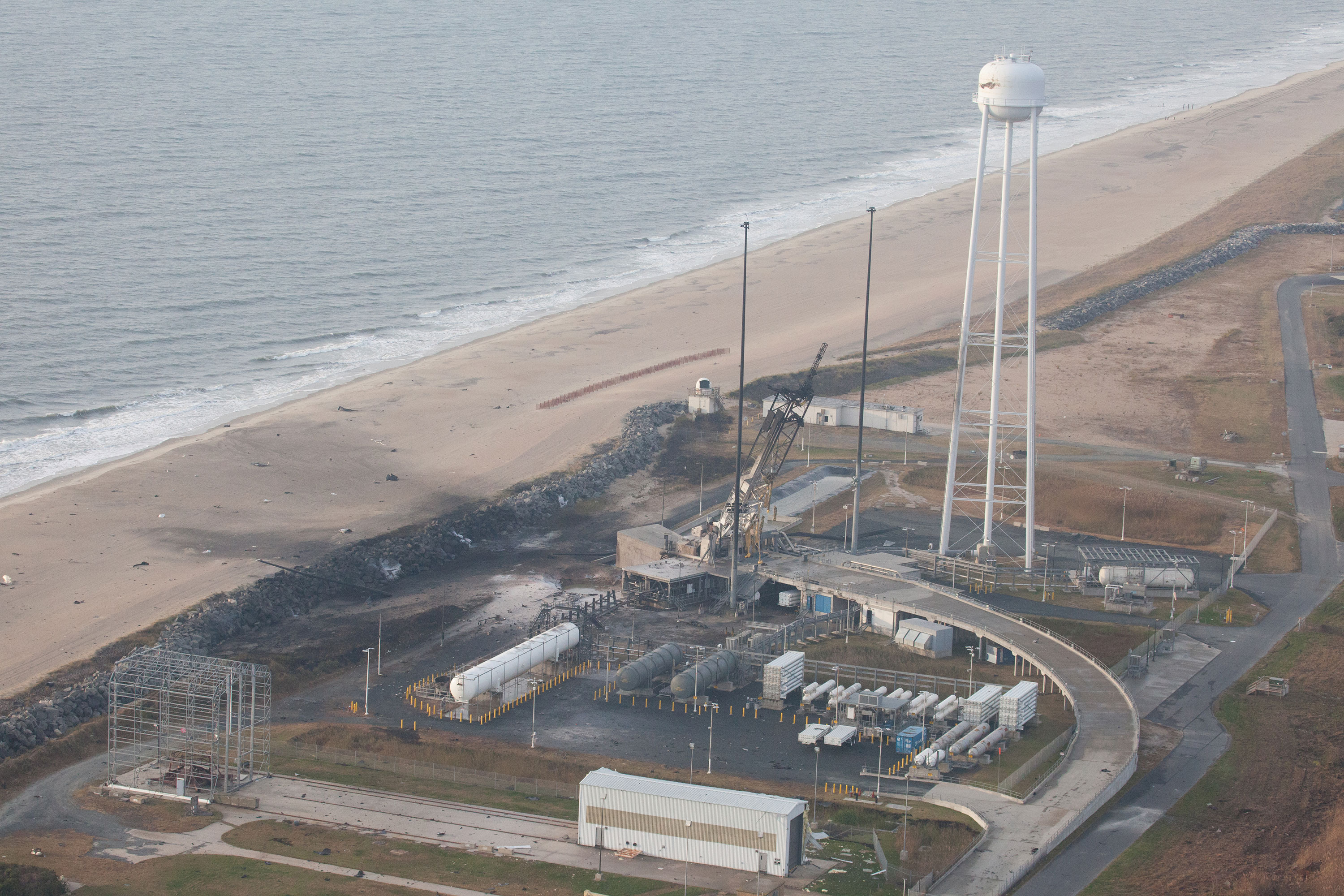 Environmental assessments around the complex and wetlands nearby indicate only minimal or no contamination from propellant and toxic materials that were released when the rocket impacted the ground immediately north of its launch pad.

Specifically, levels of RP-1 (kerosene) spillage are significantly below what would constitute an environmental hazard and pose little risk to plant or animal wildlife. Near the impact site, it appears residue from the solid propellant upper stage ATK Castor 30KL motor was mostly confined to the impact crater itself.

If repair work and recertification of Launch Pad 0A can be completed by the end of 2015, it will enable a resumption of Antares launches in 2016 when the upgraded rocket and propulsion system are completed and certified for return to flight.

Orbital hopes to conduct a static test of the new launch vehicle in late 2015 or early 2016 leading to a return to operational status sometime in mid-2016.

The flexibility of Orbital’s Cygnus cargo spacecraft to accommodate heavier cargo loads, together with the greater lift capacity of the Atlas V and upgraded Antares vehicles, will allow the company to complete all currently contracted ISS deliveries in four missions instead of the five previously planned flights over the next two years. In addition, the company’s revised approach is not expected to create any material adverse financial impacts in 2015 or future years as Orbital carries out the CRS cargo delivery and Antares propulsion upgrade programs.