The Dream Chaser is a reusable, lifting-body spacecraft capable of crewed or autonomous flight. Dream Chaser is the only lifting-body spacecraft capable of a runway landing, anywhere in the world. Stratolaunch Systems is a Paul G. Allen project dedicated to developing an air-launch system that will revolutionize space transportation by providing orbital access to space at lower costs, with greater safety and more flexibility.

As designed, the Dream Chaser-Stratolauncher human spaceflight system can carry a crew of three astronauts to LEO destinations. This versatile system can also be tailored for un-crewed space missions, including science missions, light cargo transportation or suborbital point-to-point transportation. The scaled crewed spacecraft design is based on SNC’s full-scale Dream Chaser vehicle which, for the past four years, has undergone development and flight tests as part of NASA’s Commercial Crew Program. 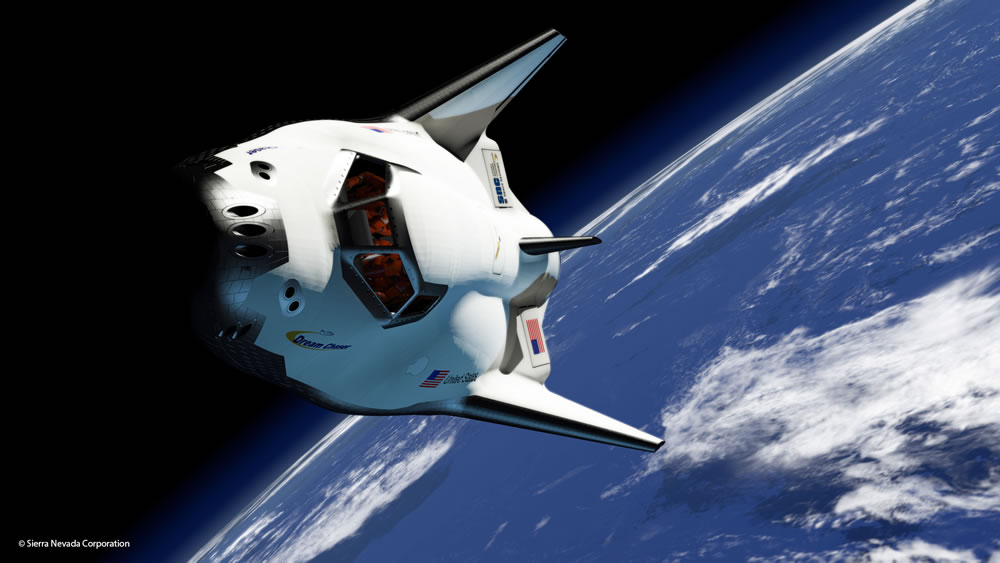 Chuck Beames, president, Vulcan Aerospace Corp and executive director for Stratolaunch Systems said, “Combining a scaled version of SNC’s Dream Chaser with the Stratolaunch air launch system could provide a highly responsive capability with the potential to reach a variety of LEO destinations and return astronauts or payloads to a U.S. runway within 24 hours.”

“This relationship would expand our portfolio to include the highly flexible Stratolaunch system for launching reusable crewed or uncrewed spacecraft, or for rapid satellite constellation deployment,” said Mark Sirangelo, corporate vice president of SNC’s Space Systems.

In addition to supporting development of human spaceflight capability, SNC studied satellite launch options and mechanisms, as well as point-to-point transportation options using the Stratolaunch launch system with a Dream Chaser spacecraft derivative. The Stratolaunch system is uniquely designed to allow for maximum operational flexibility and payload delivery from several possible operational sites, while minimizing mission constraints such as range availability and weather.

SNC’s Global Project offers clients across the globe access to low Earth orbit (LEO) without the time, resources and financial burden of developing the necessary capabilities or infrastructure to support a mature human spaceflight program. The Global Project utilizes the Dream Chaser spacecraft as a baseline vehicle which, in turn, can be customized by the client for an array of missions to support government, commercial, academic and international goals. The individual mission customization of the Global Project can be applied to both crewed and uncrewed variants for a single dedicated mission or suite of missions.

“The SNC Global Project provides, for the first time in history, an unprecedented and unique set of spaceflight opportunities for clients around the world,” said John Roth, vice president of business development for SNC’s Space Systems. “SNC is offering access to crewed or uncrewed space missions that include an optionally-piloted space vehicle, a launch vehicle or choice of launch vehicles, and the supporting infrastructure and systems required for such a valuable program. The Global Project offers a client the opportunity to leverage and expand its local technology and industrial base by engaging government research and development laboratories, aerospace industry and universities in developing payloads, vehicle modifications, and ground processing capabilities in support of the selected LEO missions. This program will literally make space accessible to people all over the world, enabling those who have only dreamed about going to space to finally achieve it.”