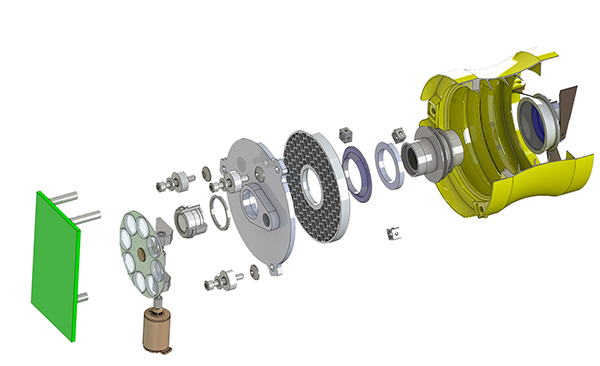 By the end of September, NASA aerospace engineer Jason Budinoff is expected to complete the first imaging telescopes ever assembled almost exclusively from 3-D-manufactured components.

“As far as I know, we are the first to attempt to build an entire instrument with 3-D printing,” said Budinoff, who works at NASA’s Goddard Space Flight Center in Greenbelt, Maryland.

Under his multi-pronged project, funded by Goddard’s Internal Research and Development (IRAD) program, Budinoff is building a fully functional, 50-millimeter (2-inch) camera whose outer tube, baffles and optical mounts are all printed as a single structure. The instrument is appropriately sized for a CubeSat, a tiny satellite comprised of individual units each about four inches on a side. The instrument will be equipped with conventionally fabricated mirrors and glass lenses and will undergo vibration and thermal-vacuum testing next year. 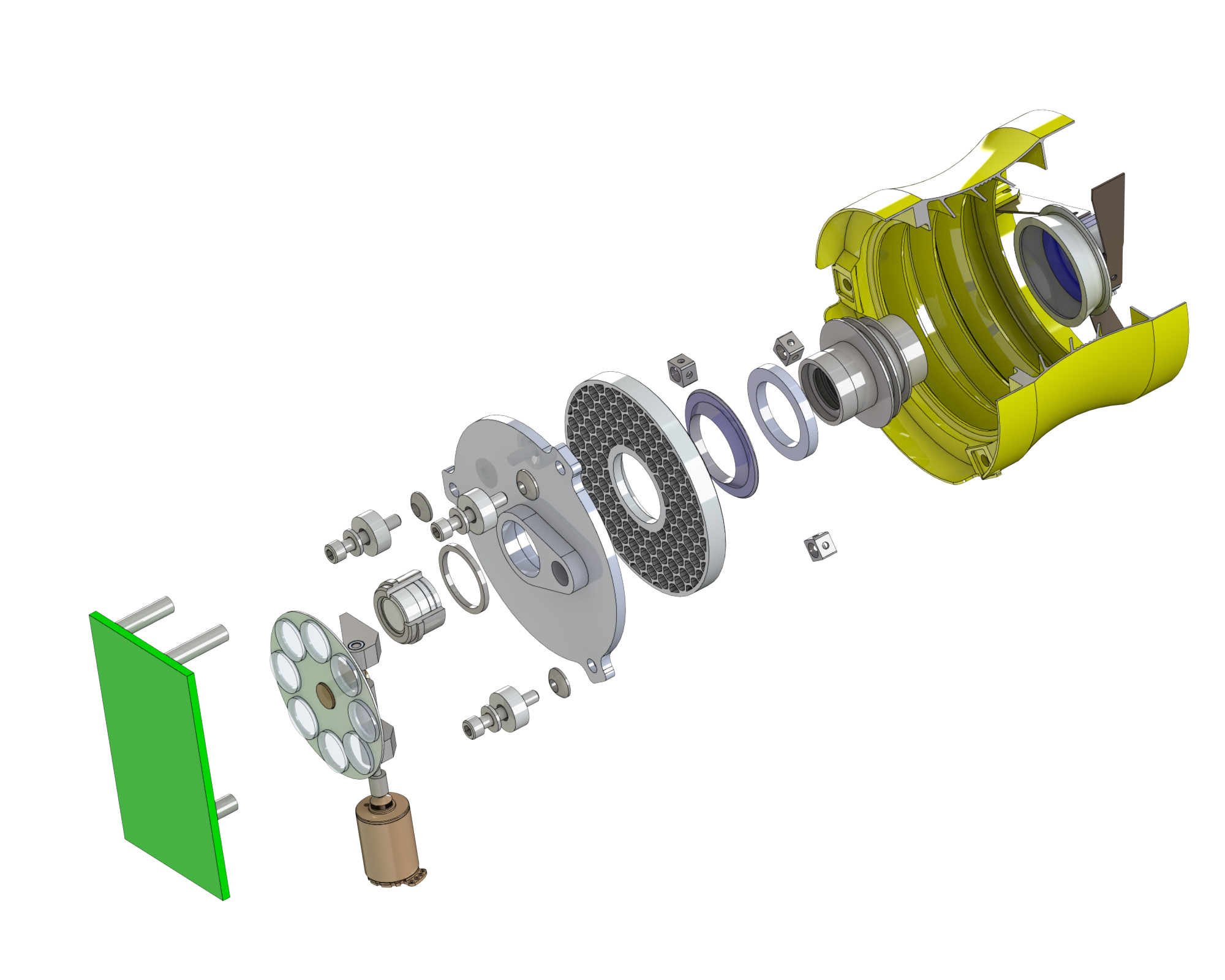 This is an exploded view of the CubeSat-class 50-millimeter (2-inch) imaging instrument that technologist Jason Budinoff is manufacturing with 3-D-printed parts. It shows the mirrors and integrated optical-mechanical structures. Image Credit: NASA Goddard/Jason Budinoff

Budinoff also is assembling a 350-millimeter (14-inch) dual-channel telescope whose size is more representative of a typical space telescope.

Budinoff is developing both to show that telescope and instrument structures can benefit from advances in 3-D, or additive, manufacturing. With this technique, a computer-controlled laser melts and fuses metal powder in precise locations as indicated by a 3-D computer-aided design (CAD) model. Because components are built layer by layer, it is possible to design internal features and passages that could not be cast or machined using more traditional manufacturing approaches.

The goal isn’t to fly them, at least not yet. “This is a pathfinder,” Budinoff said. “When we build telescopes for science instruments, it usually involves hundreds of pieces. These components are complex and very expensive to build. But with 3-D printing, we can reduce the overall number of parts and make them with nearly arbitrary geometries. We’re not limited by traditional mill- and lathe-fabrication operations.”

In particular, the 2-inch instrument design involves the fabrication of four different pieces made from powdered aluminum and titanium. A comparable, traditionally manufactured camera would require between five and 10 times the number of parts, he said. Furthermore, the instrument’s baffling – the component that helps reduce stray light in telescopes – is angled in a pattern that instrument builders cannot create with traditional manufacturing approaches in a single piece.

When he completes the camera’s assembly at the end of the fiscal year – ready for space-qualification testing – the project will have taken a mere three months to complete for a fraction of the cost. “I basically want to show that additive-machined instruments can fly,” he said. “We will have mitigated the risk, and when future program managers ask, ‘Can we use this technology?’ we can say, ‘Yes, we already have qualified it.’” 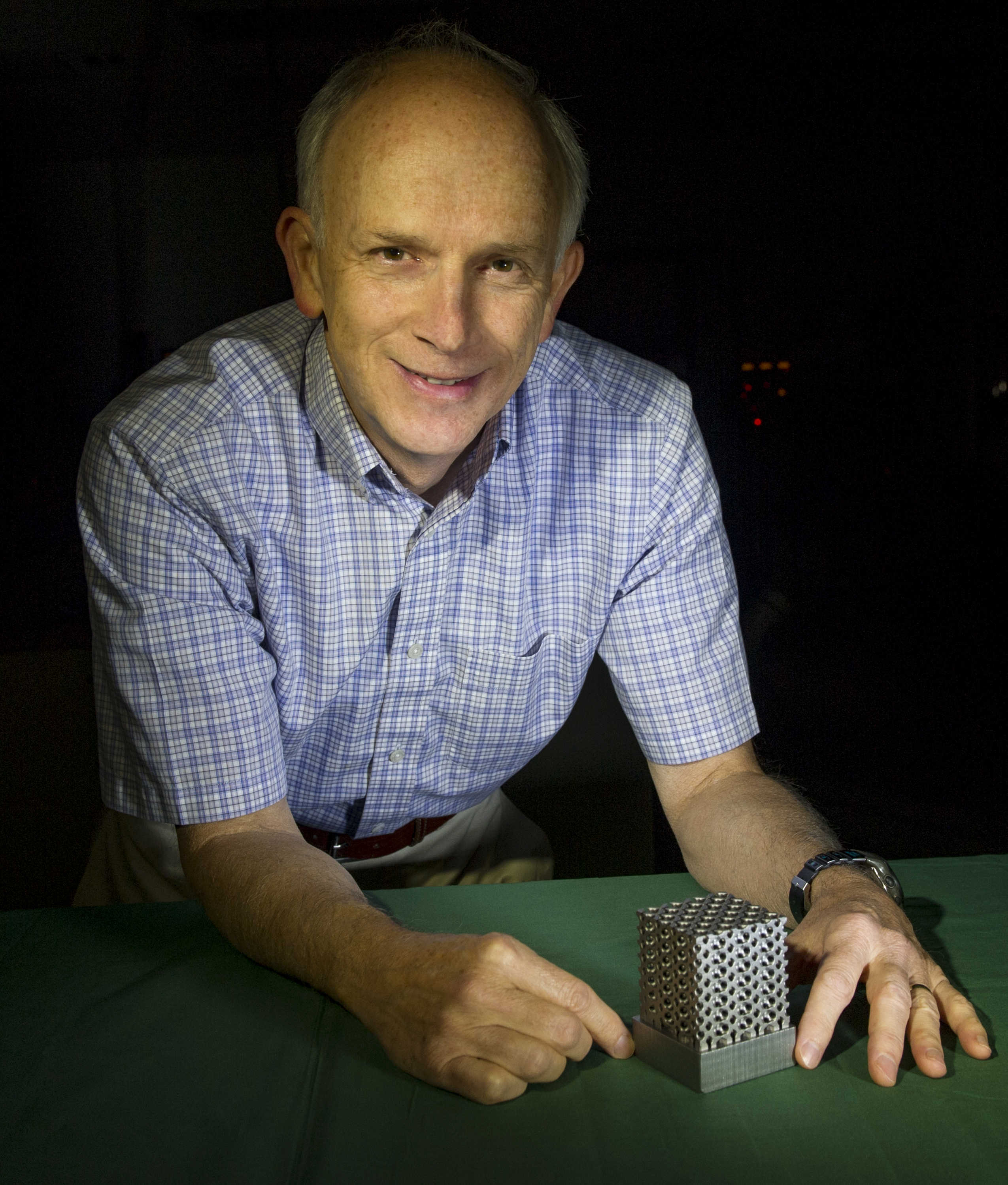 Next year, Principal Investigator Jason Budinoff plans to experiment with printing instrument components made of Invar alloy, a material being prepared for 3-D printing by Goddard technologist Tim Stephenson, who is pictured here along with his Invar structure. Image Credit: NASA Goddard/Bill Hrybyk

Budinoff also wants to demonstrate that he can use powdered aluminum to produce 3-D-manufactured telescope mirrors – a challenge given how porous aluminum is, which makes it difficult to polish the surfaces. Under his plan, a 3-D-manufacturing vendor will fabricate an unpolished mirror blank appropriate for his two-inch instrument. He then will place the optic inside a pressure chamber filled with inert gas. As the gas pressure increases to 15,000 psi, the heated chamber in essence will squeeze the mirror to reduce the surface porosity – a process called hot isostatic pressing.

“We think this, combined with the deposition of a thin layer of aluminum on the surface and Goddard-developed aluminum stabilizing heat treatments, will enable 3-D-printed metal mirrors,” Budinoff said.

Should he prove the approach, Budinoff said NASA scientists would benefit enormously – particularly those interested in building infrared-sensing instruments, which typically operate at super-cold temperatures to gather the infrared light that can be easily overwhelmed by instrument-generated heat. Often, these instruments are made of different materials. However, if all the instrument’s components, including the mirrors, were made of aluminum, then many of the separate parts could be 3-D printed as single structures, reducing the parts count and material mismatch. This would decrease the number of interfaces and increase the instrument’s stability, Budinoff added.

Next year, he also plans to experiment with printing instrument components made of Invar alloy, a material being prepared for 3-D printing by Goddard technologist Tim Stephenson. The 100-year-old iron-nickel alloy offers extreme dimensional stability over a range of temperatures. The material is ideal for building super-stable, lightweight skeletons that support telescopes and other instruments.

“Anyone who builds optical instruments will benefit from what we’re learning here,” Budinoff said. “I think we can demonstrate an order-of-magnitude reduction in cost and time with 3-D printing.”