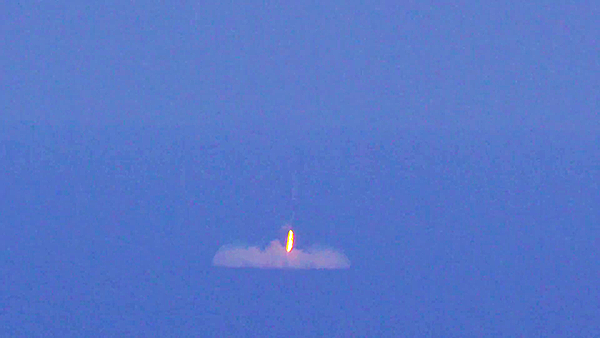 When SpaceX launched a Falcon 9 v1.1 rocket from Cape Canaveral carrying the first OG-2 mission for Orbcomm, a P3 Orion aircraft was waiting downrange over the Atlantic Ocean to capture the powered descent and attempted soft-landing of the rocket’s first stage in the water. After the booster separated from the second stage, it re-lit some of its Merlin engines and guided itself through a supersonic re-entry and a controlled descent. Now, SpaceX has released a short video the shows the rocket in the final seconds of flight.

The aircraft’s camera lost track of the rocket just before it touched the water, but the video clearly shows the Falcon stage kicking up water spray as it neared the surface still in a vertical orientation, proof that the Falcon 9 first stage is able to guide itself through re-entry and descent back to Earth.

Later this year, SpaceX plans to attempt another recovery at sea. If rumors are correct, next time they will aim to land the rocket on the deck of a floating barge, simulating the precise trajectory and attitude control necessary for a safe landing on land back near the launch site. When perfected, future rockets will return to Cape Canaveral under their own power, ready to fly again after relatively minor refurbishment and refueling, and marking a great step forward in launch vehicle technology, which until now has been limited to expendable launch vehicles are the extremely expensive space shuttle.