If you could lick the surface of Jupiter’s icy moon Europa, you would actually be sampling a bit of the ocean beneath. A new paper by Mike Brown, an astronomer at the California Institute of Technology in Pasadena, Calif., and Kevin Hand from NASA’s Jet Propulsion Laboratory, also in Pasadena, details the strongest evidence yet that salty water from the vast liquid ocean beneath Europa’s frozen exterior actually makes its way to the surface.

The finding, based on some of the best data of its kind since NASA’s Galileo mission (1989 to 2003) to study Jupiter and its moons, suggests there is a chemical exchange between the ocean and surface, making the ocean a richer chemical environment. The work is described in a paper that has been accepted for publication in the Astronomical Journal.

The exchange between the ocean and the surface, Brown said, “means that energy might be going into the ocean, which is important in terms of the possibilities for life there. It also means that if you’d like to know what’s in the ocean, you can just go to the surface and scrape some off.” 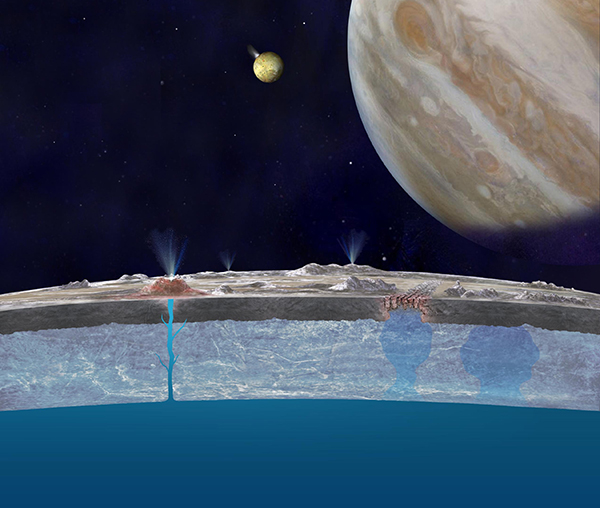 Based on new evidence from Jupiter’s moon Europa, astronomers hypothesize that chloride salts bubble up from the icy moon’s global liquid ocean and reach the frozen surface where they are bombarded with sulfur from volcanoes on Jupiter’s innermost large moon, Io. The new findings propose answers to questions that have been debated since the days of NASA’s Voyager and Galileo missions. This illustration of Europa (foreground), Jupiter (right) and Io (middle) is an artist’s concept.

Europa’s ocean is thought to cover the moon’s whole globe and is about 60 miles (100 kilometers) thick under a thin ice shell. Since the days of NASA’s Voyager and Galileo missions, scientists have debated the composition of Europa’s surface. The infrared spectrometer aboard Galileo was not capable of providing the detail needed to identify definitively some of the materials present on the surface. Now, using the Keck II Telescope on Mauna Kea, Hawaii, and its OSIRIS spectrometer, Brown and Hand have identified a spectroscopic feature on Europa’s surface that indicates the presence of a magnesium sulfate salt, a mineral called epsomite, that could have formed by oxidation of a mineral likely originating from the ocean below.

Brown and Hand started by mapping the distribution of pure water ice versus anything else. The spectra showed that even Europa’s leading hemisphere contains significant amounts of non-water ice. Then, at low latitudes on the trailing hemisphere-the area with the greatest concentration of the non-water ice material-they found a tiny, never-before-detected dip in the spectrum.

The two researchers tested everything from sodium chloride to Drano in Hand’s lab at JPL, where he tries to simulate the environments found on various icy worlds. At the end of the day, the signature of magnesium sulfate persisted.

The magnesium sulfate appears to be generated by the irradiation of sulfur ejected from the Jovian moon Io and, the authors deduce, magnesium chloride salt originating from Europa’s ocean. Chlorides such as sodium and potassium chlorides, which are expected to be on the Europa surface, are in general not detectable because they have no clear infrared spectral features. But magnesium sulfate is detectable. The authors believe the composition of Europa’s ocean may closely resemble the salty ocean of Earth.

Europa is considered a premier target in the search for life beyond Earth, Hand said. A NASA-funded study team led by JPL and the Johns Hopkins University Applied Physics Laboratory, Laurel, Md., has been working with the scientific community to identify options to explore Europa further. “If we’ve learned anything about life on Earth, it’s that where there’s liquid water, there’s generally life,” Hand said. “And of course our ocean is a nice, salty ocean. Perhaps Europa’s salty ocean is also a wonderful place for life.”

The work was supported, in part, by the NASA Astrobiology Institute through the Icy Worlds team based at JPL, a division of Caltech. The NASA Astrobiology Institute, based at NASA’s Ames Research Center, Moffett Field, Calif., is a partnership among NASA, 15 U.S. teams, and 13 international consortia. The NAI is part of NASA’s Astrobiology program, which supports research into the origin, evolution, distribution and future of life on Earth and the potential for life elsewhere.