Two NASA sounding rockets successfully flew over the Norwegian Sea early in the morning December 8 carrying an experiment to study the electrodynamics of the polar cusp.

The Twin Rockets to Investigate Cusp Electrodynamics or TRICE-2 were launched at 3:26 and 3:28 a.m. EST from the Andoya Space Center in Andenes, Norway. The first rocket flew to an altitude 646 miles and the second flew to 469 miles.

TRICE-2, from the University of Iowa in Iowa City, is exploring magnetic reconnection, the explosive process that allows charged particles from space to stream into Earth’s atmosphere. The results promise to shed light on the fundamental process of magnetic reconnection and, in the long run, help us better predict how and when Earth’s magnetic shield can suddenly become porous and let outside particles in.

TRICE-2 was the second of nine sounding rocket missions launching over the next 14 months as part of the Grand Challenge Initiative (GCI) – Cusp. Drawing researchers from the United States, Canada, Norway, the UK and Japan, the Grand Challenge is an international collaboration to explore the northern polar cusp, hopefully cracking the code of this unusual portal between Earth and space. 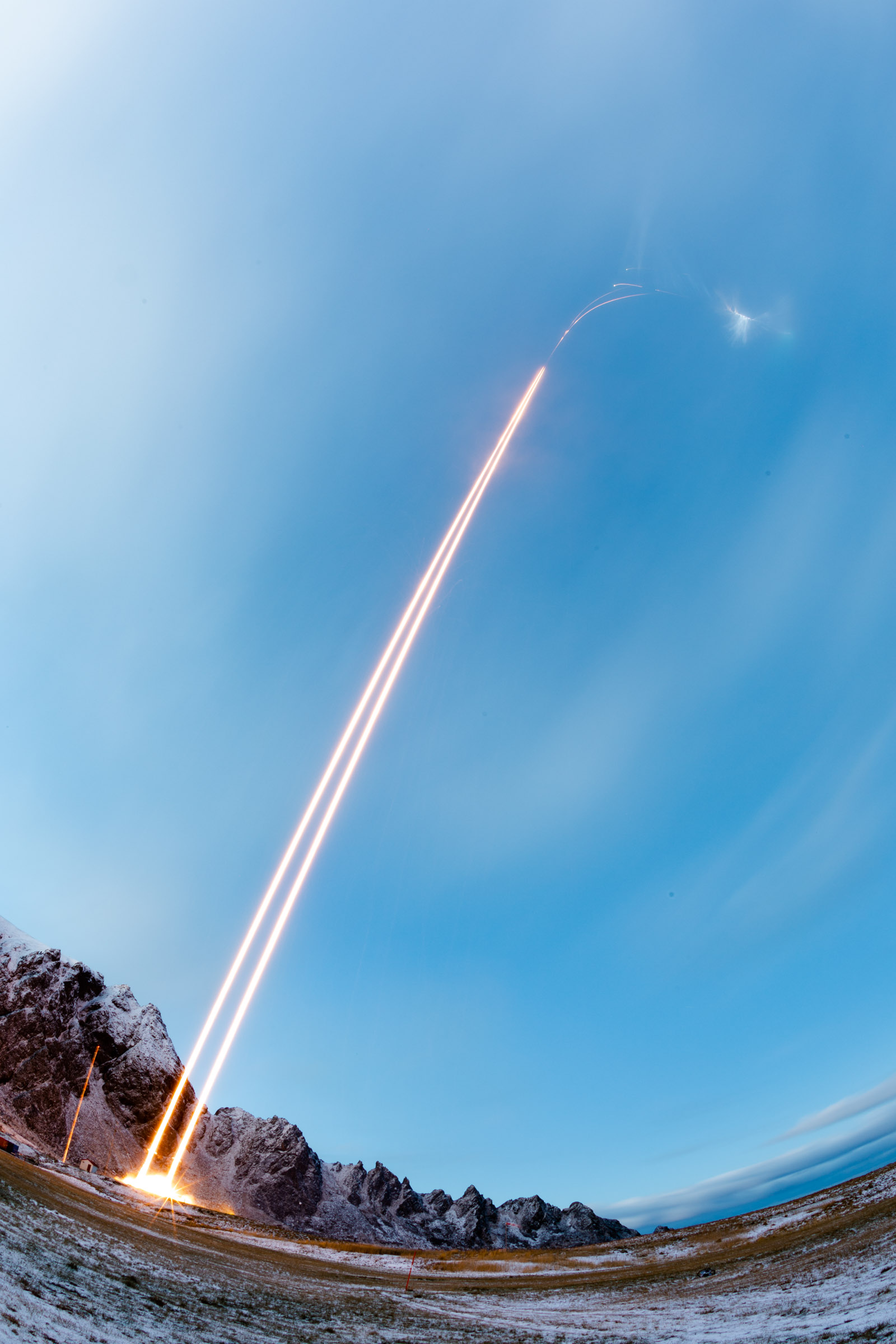 Earth is surrounded by a magnetosphere, a giant magnetic shield created by the churning of liquid iron deep inside the planet. Our magnetosphere is what stands between us and a steady rain of electrically charged ions and electrons streaming from the Sun, known as the solar wind.

For the most part, it holds strong. But occasionally, it gives way.

“When the solar wind encounters Earth, the energy and field lines of the Sun’s magnetic field can connect up with those of Earth,” said Craig Kletzing, a physicist at the University of Iowa in Iowa City and TRICE-2’s principal investigator. The magnetic reconnection process creates a bridge between the solar wind and Earth, allowing ions and electrons from the Sun to stream directly into Earth’s atmosphere via a region known as the polar cusp.

“All of these field lines [where magnetic reconnection occurs] funnel down into what we call the cusp,” said Stephen Fuselier, a space physicist at the Southwest Research Institute in San Antonio, Texas and TRICE-2 team member. “When you fly through that region, you get the time history of all the fields that you’re crossing.” 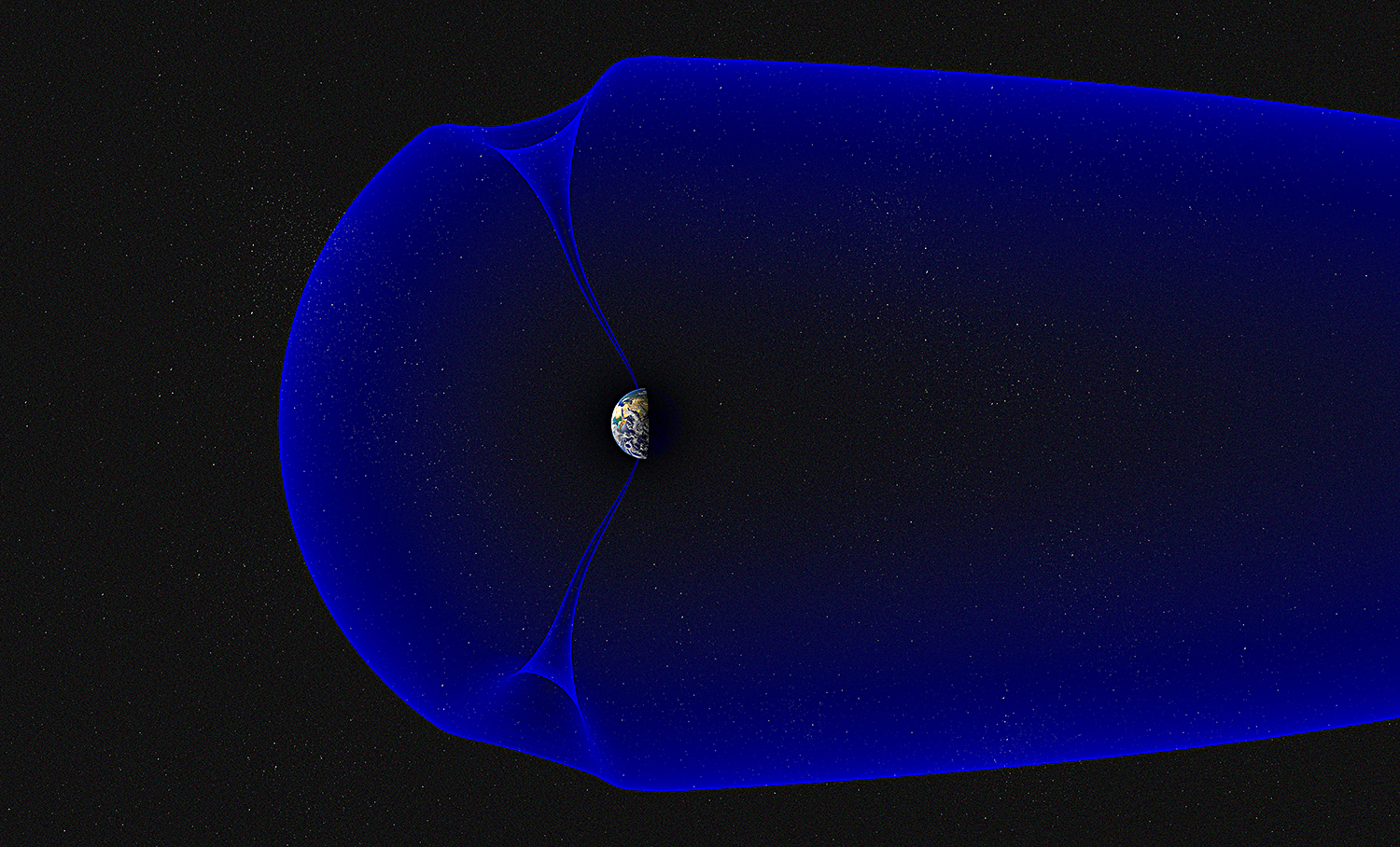 The polar cusp is a weak spot in our magnetic bubble – but it’s also a place to investigate magnetic reconnection processes that occurred in otherwise difficult-to-access regions of Earth’s magnetosphere. Researchers have measured the solar wind ions that pour in through the cusp for clues about magnetic reconnection processes that allow entry. But so far, a puzzling feature of these ions remains unexplained.

As solar wind ions race along the newly reconnected magnetic field lines, they spread themselves out like runners in a marathon. The fastest-moving ions move to the front of the pack, overtaking those moving at slower speeds. Slower-moving ions gradually fall behind. In theory, this process should create a constant, unbroken stream of particles, smoothly varying by energy levels: the highest energy ions reach Earth first, followed by slower and slower ions behind them.

But when spacecraft have measured the ions that pour in, they don’t find such a smooth, unbroken stream – instead, they find abrupt transitions from high to low energies.

“What people actually observe is something that has little steps,” said Kletzing. “So then the question becomes: What causes those steps?”

Puzzled by these results, scientists developed two models of magnetic reconnection that might produce them. The first model suggests that magnetic reconnection varies in time, like a faucet being turned on and off. The abrupt changes, or steps, in the data are produced because the faucet switches from on to off and vice versa, releasing particles in short spurts.

“The other possibility is that we’re seeing four or five different places where reconnection is happening,” said Kletzing. According to this model, the steps are the result of the spacecraft passing through different magnetic reconnection events, like a finger running along the separate streams of a sprinkler. As your finger passes through one stream and abruptly enters a new one, you feel a sudden change – a step in the data.

The TRICE-2 team designed their mission to differentiate these two models. The key difference between them, they reasoned, is whether the observations should change over time.

If reconnection is turning on and off like a faucet, the specific pattern of steps you observed should be changing all the time. “If you flew through a minute or two later, the whole pattern would be different,” said Kletzing.

But if reconnection is more like a sprinkler, with different streams fixed to different locations, then you should feel the same steps no matter what time you passed through them. “In that case, two minutes later you should see exactly the same pattern in the same place.” 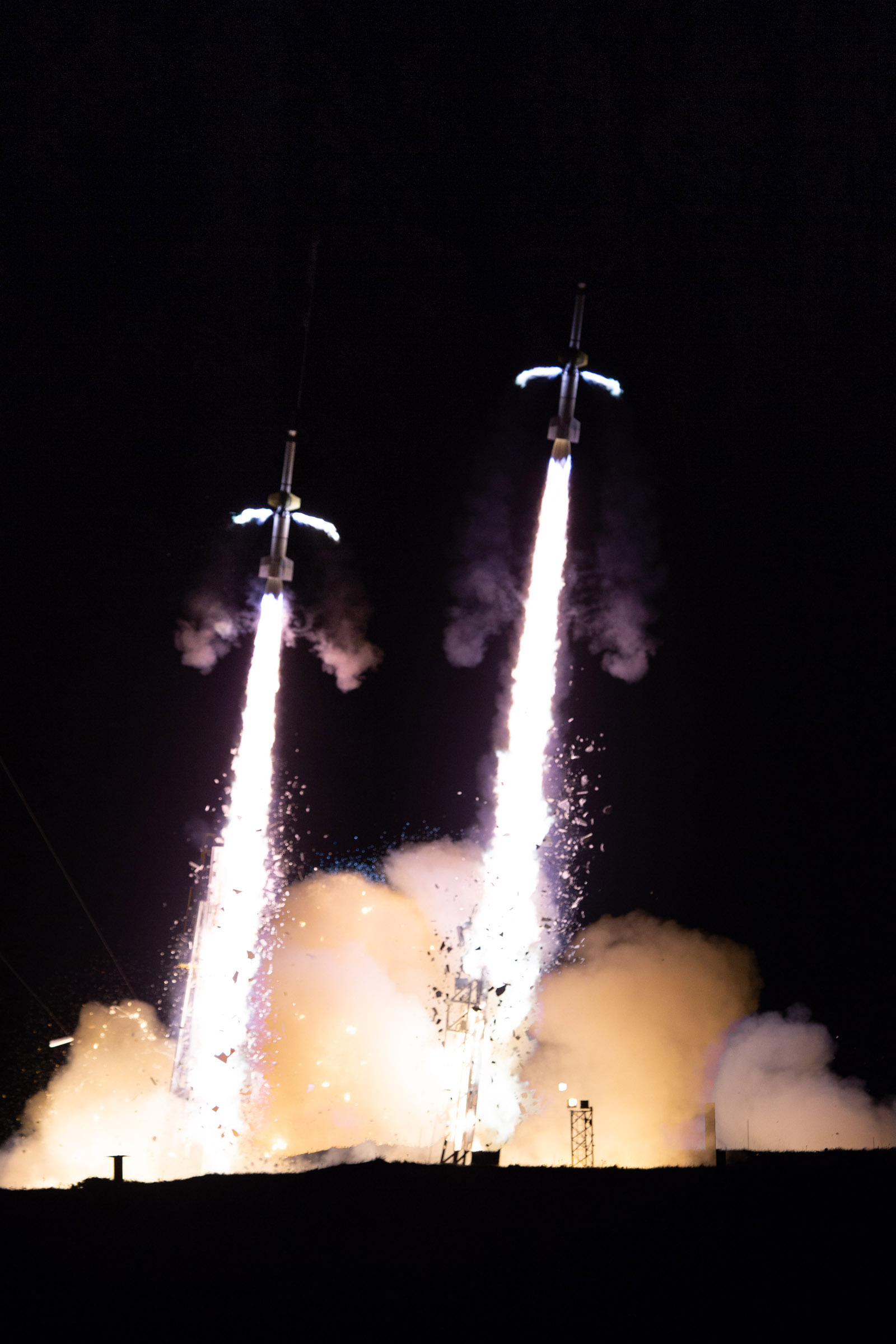 This composite photo shows The Twin Rockets to Investigate Cusp Electrodynamics or TRICE-2 that were launched at 3:26 and 3:28 a.m. EST, Dec. 8, 2018, from the Andoya Space Center in Andenes, Norway. The motors firing on the sides of the first stages spin the rocket to assist in stabilization during flight. The mission is one of nine international missions through January 2020 called the Grand Challenge Initiative – Cusp. Credit: NASA/Jamie Adkins

The next two missions in the GCI will be the Cusp Alfvén and Plasma Electrodynamics Rocket, or CAPER-2, mission from Dartmouth College in Hanover, New Hampshire, between Jan. 1-14, 2019 and G-Chaser between Jan. 10-14, 2019. G-Chaser is an educational mission carrying experiments developed by university students from the United States, Norway and Japan. Both missions will be conducted from the Andoya Space Center.