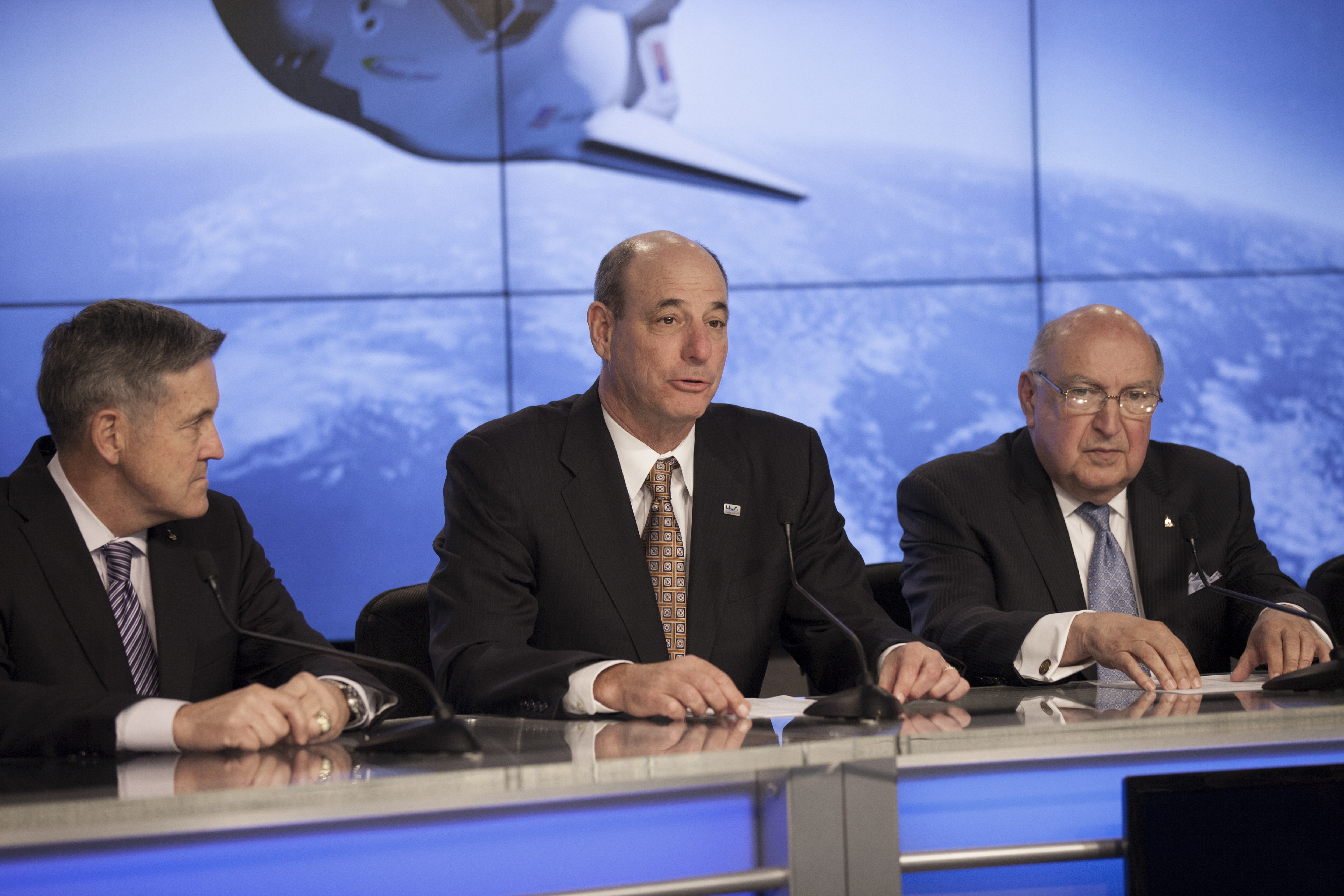 Michael Gass, president and CEO of United Launch Alliance, or ULA, joins Sierra Nevada Corporation, or SNC, Space Systems, as the company announces the steps it will take to prepare for a November 2016 orbital flight of its Dream Chaser spacecraft from Florida’s Space Coast. Photo credit: NASA/Kim Shiflett

United Launch Alliance named veteran aerospace industry executive Tory Bruno as its next president and chief executive officer, succeeding Michael Gass, who has served as president and CEO since ULA’s founding in 2006. Bruno’s appointment is effective immediately; he and Gass will work collaboratively to ensure a smooth leadership transition and continued commitment to mission success.

Bruno joins ULA from Lockheed Martin, where he was most recently vice president and general manager of Strategic and Missile Defense Systems. In that position he oversaw 4,500 employees and managed a diverse portfolio for U.S. and international customers. Over the course of his 30-year career, Bruno has held executive leadership positions in a number of space and missile programs, including the U.S. Navy’s Fleet Ballistic Missile program and the Terminal High Altitude Area Defense Missile.

“Mike’s track record speaks for itself: 86 successful launches in a row, including many of our nation’s most complex and critical space missions,” said Rick Ambrose, executive vice president of Lockheed Martin Space Systems and a ULA board member. “Tory is an ideal leader to take the reins at ULA. He’ll bring the same unwavering commitment to mission success that has been ULA’s hallmark, and will apply his proven track record of driving customer focus, innovation and affordability to shape ULA’s future.”

“We’re grateful for Mike’s leadership and contribution to ULA’s customers and employees, as well as the space industry as a whole,” said Craig Cooning, president of Boeing Network and Space Systems and a ULA board member. “Tory understands the launch business as well as anyone and is well-qualified to ensure ULA keeps pace with changing customer needs and launch industry dynamics.”

Gass retires after eight years as ULA’s president and CEO, during which he oversaw the establishment of the new joint venture and successfully led the integration of a portfolio of launch vehicles that is unmatched in reliability and performance. He previously led Atlas rocket programs at Lockheed Martin and, earlier in his career, held a variety of management positions at General Dynamics’ Space Systems division.

Michael Gass Statement Regarding His Retirement

I have been honored to serve as the chief executive officer of United Launch Alliance (ULA) since its formation nearly eight years ago. With my intent to retire in the near term and the changing industry landscape over the next several years, the Board of Directors and I have agreed that the immediate appointment of my successor to begin the leadership transition is in the best interest of the company. I have known my successor, Tory Bruno, for many years. He has demonstrated an impressive leadership track record and has the skills to lead ULA into the future. I will support Tory over the next several months to ensure a smooth transition. During my tenure as CEO, the ULA team has launched 86 missions and achieved an unprecedented record of mission success. I am humbled to have served as the leader of such an outstanding company with the most talented and capable launch team in the world.

“It’s a privilege to join the United Launch Alliance team. The talented men and women of ULA have launched the satellites and spacecraft that connect our world, protect our citizens, and explore our universe. I’m proud to become a part of that vital mission and look forward to carrying on ULA’s unmatched track record of performance. I’m committed to working closely with ULA’s customers to ensure this organization continues to adapt to their changing needs with agility, innovation and efficiency.”