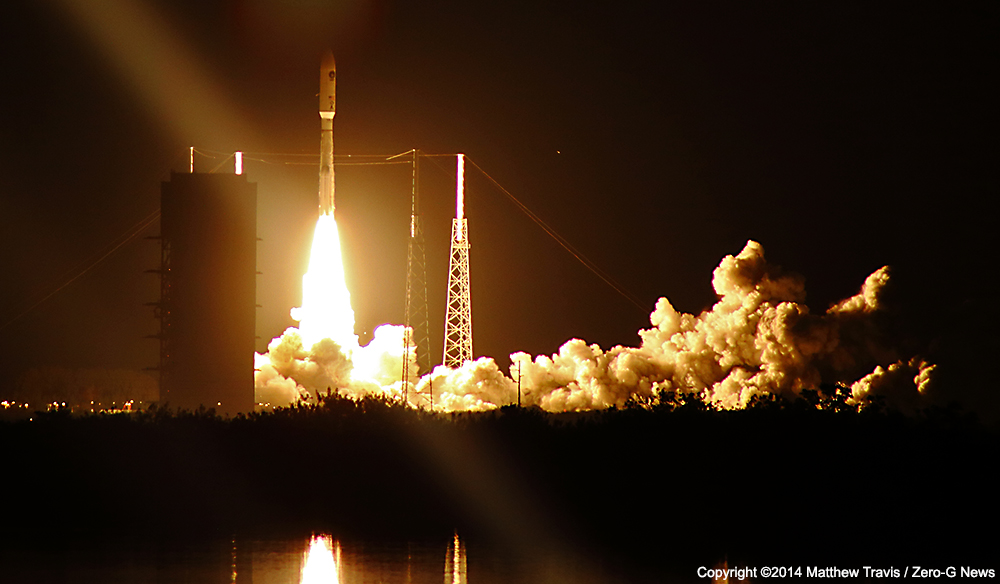 Check out our MUOS-3 Launch Photo Gallery on Flickr!

“Today’s launch was the 200th Atlas-Centaur launch,” said Jim Sponnick, ULA vice president, Atlas and Delta Programs. “A very sincere congratulations to the many women and men responsible for the incredible success of the Centaur upper stage over the last 5 decades!”

After a short delay due to strong upper-altitude winds and RF interference, Atlas blasted off at 8:-04 p.m. EST from Cape Canaveral’s Space Launch Complex 41. Flying in its largest (Atlas V 551) configuration with 5 Aerojet Rocketdyne solid rocket boosters and a 5-meter payload fairing, the massive Atlas V lit up the night sky over east central Florida. Headed toward orbit over the Equator, the rocket pitched over 4 seconds after liftoff and accelerated quickly east over the Atlantic Ocean on the first leg of its 3 hour mission to deliver MUOS-3 to geosynchronous transfer orbit (GTO).

“The MUOS-3 spacecraft is the heaviest payload to launch atop an Atlas V launch vehicle”, remarked Sponnick after the successful launch. “The Atlas V generated more than two and half million pounds of thrust at liftoff to meet the demands of lifting this nearly 7.5-ton satellite.” 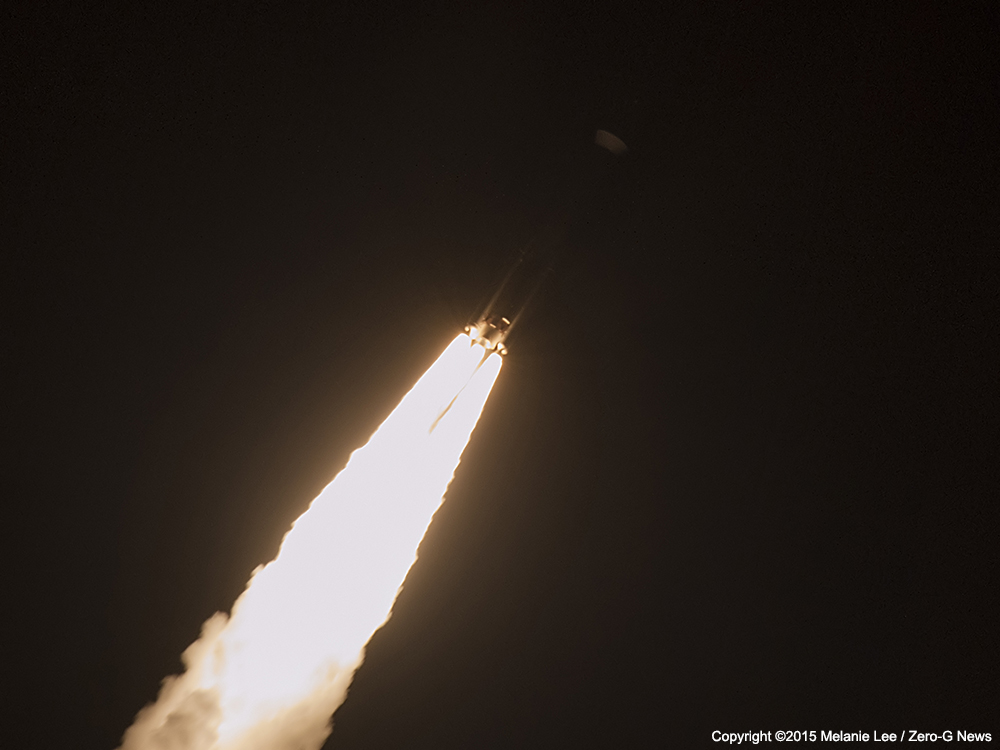 Check out our MUOS-3 Launch Photo Gallery on Flickr!

The Atlas’s Aerojet Rocketdyne RL10C-1 powered Centaur upper stage conducted three separate burns to place MUOS-3 was a transfer orbit with a 19 degree equatorial inclination. The spacecraft will use its own thrusters to gradually raise and circularize its orbit 22,300 miles above Earth and reduce inclination to near zero.

Shortly after separating from the Centaur payload adapter, MUOS-3 began maneuvering to its final orbit, a process which should take about 8 days. Twelve days after launch, the satellite’s solar arrays and antenna will be deployed and it will begin on-orbit commissioning.

This was the fifth flight of the Atlas V 551, the same configuration that launched previous MUOS spacecraft as well as NASA’s New Horizons and Juno probes to explore Pluto and Jupiter, respectively.

Atlas V 551 stands 204 feet tall with a liftoff mass of 1.3 million pounds. The vehicle is uses a single Common Core Booster and a Centaur Upper Stage on top of it with 5 solid rocket boosters.

Atlas V 551 features a 5.4-meter (17.7 feet) payload Fairing under which it can carry payloads of up to 40,000 pounds to Low Earth Orbit or 19,000 pounds to Geostationary Transfer Orbit. Direct injection into geostationary orbit of payloads up to 8700 pounds is also possible. 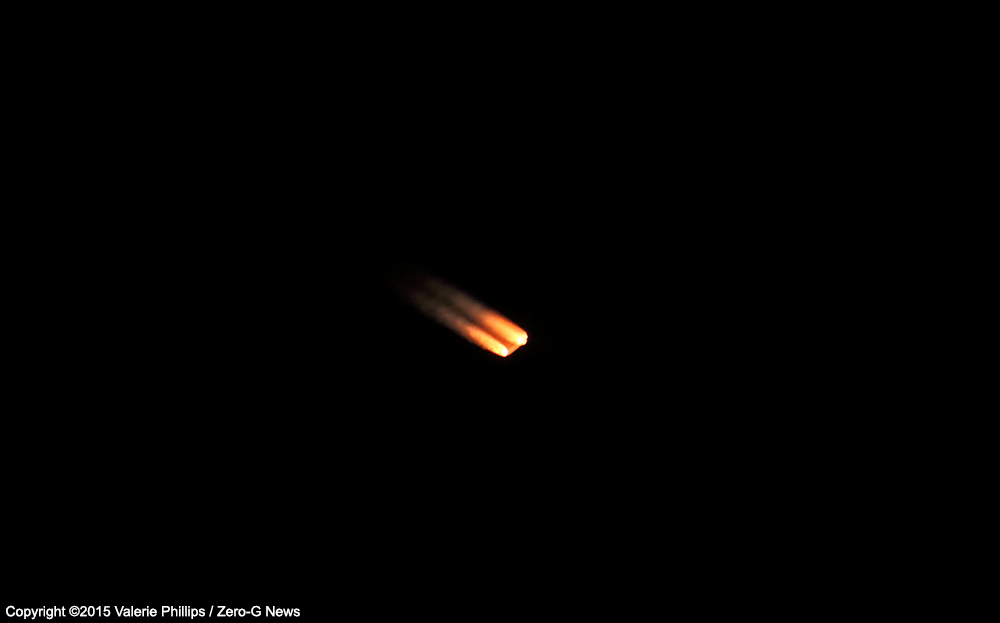 The Atlas V booster is 12.5 feet in diameter and 106.5 feet in length. Atlas booster propulsion is provided by the RD-180 engine system (a single engine with two thrust chambers). The RD-180 burns RP-1 (Rocket Propellant-1 or highly refined kerosene) and liquid oxygen, and delivers 860,200 pounds of thrust at sea level. The solid rocket boosters generate the additional power required at liftoff, with each SRB providing 348,500 pounds of thrust. The Atlas V booster is controlled by the Centaur avionics system, which provides guidance, flight control, and vehicle sequencing functions during the booster and Centaur phases of flight.

The Centaur second stage is 10 feet in diameter and 41.5 feet in length. It uses a single RL10C-1 engine producing 22,900 pounds of thrust using cryogenic liquid hydrogen and liquid oxygen propellants.

Managed by the U.S. Navy, the Mobile User Objective System will provide global high-speed communications to the Department of Defense and other government agencies. Using 3G cellular technology, the MUOS spacecraft have been likened to “cell towers in the sky”.

MUOS-3 is the third of four primary operational spacecraft. It will serve users in the Atlantic Ocean basin. It joins MUOS 1, launched in 2012 and serving the Pacific Ocean and MUOS 2, deployed in 2013 and covering the Americas.

Now in orbit, spacecraft manufacturer Lockheed Martin will execute several months of in-space checkout and testing before handing the satellite over to the Navy for operational use.

Meanwhile, ULA hopes to continue its streak of successful launches in less than two weeks when a Delta II rocket blasts off from Space Launch Complex 2 at Vandenberg AFB with NASA’s Soil Moisture Active Passive (SMAP) satellite. Given a temporary reprieve from retirement, this will be one of the final few Delta II rockets before it is retired for good sometime around 2017-18.