A United Launch Alliance (ULA) Atlas V rocket successfully launched the second Space-Based Infrared System (SBIRS) GEO-2 satellite for the U.S. Air Force at 5:21 p.m. EDT today from Space Launch Complex-41. ULA launched the first satellite in the constellation, GEO-1, aboard and Atlas V on May 7, 2011. This was the 3rd ULA launch of the year, the 37th Atlas V mission, and the 69th ULA launch since the company was formed in December 2006.

“The ULA team is honored to serve a pivotal role in placing this critical capability in orbit for our women and men serving around the world and protecting our freedom,” said Jim Sponnick, ULA vice president, Mission Operations. “From nearly two years ago when we began production of the launch vehicle, through today’s successful mission delivery, this very strong and well-integrated government and industry team has ensured that mission success remains the highest priority at every step in the process.”

This mission was launched aboard an Atlas V 401 Evolved Expendable Launch Vehicle (EELV), which includes a 4-meter diameter payload fairing. The booster for this mission was powered by the RD AMROSS RD-180 engine and the Centaur upper stage was powered by a single Pratt & Whitney Rocketdyne RL-10A engine. 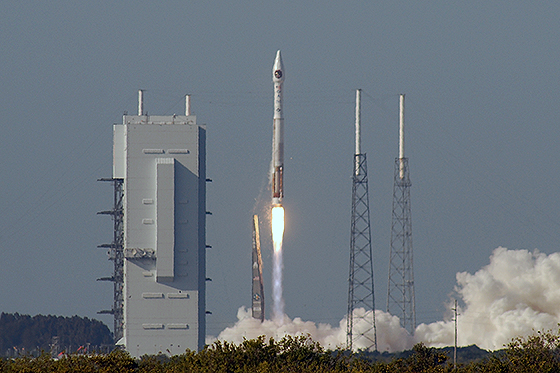 ‘Threading the needle’ through the catenary lightning wires, the Atlas 5/SBIRS GEO-2 vehicle rises on a torrent of flame and super-heated gases. Credit: NASATech.net

The EELV program was established by the United States Air Force to provide assured access to space for Department of Defense and other government payloads. The commercially developed EELV Program supports the full range of government mission requirements, while delivering on schedule and providing significant cost savings over the heritage launch systems.