After lighting its nine uprated Merlin 1D engines, arranged in a new circular pattern and generating 1.3 million pounds of thrust, the slim, pencil-like rocket gracefully climbed into clear skies, programmed to follow a southerly course over the Pacific Ocean heading for polar orbit.

With the roar of its powerful first stage rolling across the seaside hills, the vehicle achieved the speed of sound 70 seconds after liftoff. Falcon reached the region of maximum aerodynbamic pressure, Max-Q, 10 seconds later and quickly gained altitude and speed with its relatively light payloads. 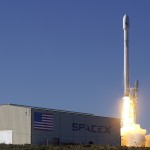 Two and a half minutes after launch, 2 of the engines cutoff in order to maintain loads on the vehicle. Seconds later, having completed its job, the first stage shutdown and dropped away to leave the vehicle’s second stage and single Merlin engine to complete its mission with a six-minute, 17-second burn. The upper stage burned out at T+9 minutes, 14 seconds and entered a three minute coast phase in preparation for the start of the spacecraft separation sequence fourteen minutes, 14 seconds after launch.

It appears that the upgraded Falcon apparently performed flawlessly during launch and all satellites were successfully deployed.

The primary satellite, Canada’s CASSIOPE, was deployed at T+14:14, followed by the three smaller satellites in a staggered fashion over the next 7 minutes.

About an hour after launch, CASSIOPE’s mission control team reported they had received signal from a healthy spacecraft on its first pass over ground stations following separation.

CASSIOPE is a multifunctional mission designed to serve both a scientific and a demonstration of technology purpose. The small satellite measures 1.8 m in diameter x 1.4 m high and weighs 481 kg. It will fly in a slightly elliptical orbit that goes back and forth, over the Equator, from the North to the South Polar Regions.

The science payload of CASSIOPE, called the enhanced Polar Outflow Probe, or e-POP, will be Canada’s first space environment sensor suite, consisting of eight instruments, including plasma sensors, radio wave receivers, magnetometers, CCD cameras, and a beacon transmitter. These instruments will enable the collection of new data on space storms and associated plasma outflows in the upper atmosphere and their potentially devastating impacts on radio communications, GPS navigation and other space-based technologies.

CUSat is a technology demonstrator developed by Cornell University. CUSat will use a new, relative GPS algorithm called Carrier-phase Differential GPS (CDGPS) that will provide accuracy to the millimeter level.

POPACS (Polar Orbiting Passive Atmospheric Calibration Spheres) is a privately funded CubeSat mission to measure the effects of solar flares and coronal mass ejections on the density of Earth’s upper atmosphere during solar cycles 24 and 25. POPACS is a mission by collaboration between Utah State University, Gil Moore, Planetary Systems Corporation and Drexel University.

DANDE (Drag & Atmospheric Neutral Density Explorer) is a 50 kg spherical spacecraft developed by students at the University of Colorado at Boulder. The goal of the DANDE mission is to provide an improved understanding of the satellite drag environment in the lower-thermosphere.

SpaceX’s Space Launch Complex 4E at Vandenberg Air Force Base has a long history dating back to the early 1960s. Originally an Atlas launch pad activated in 1962, 4E was in active use until a 2005 Titan IV launch. SpaceX’s groundbreaking was in July 2011, and the pad was completed in November 2012 in just 17 months – something that normally takes several years.

SpaceX took advantage of some existing infrastructure, but implemented extensive modifications and reconstruction of the pad. Part of the renovation included tearing down a 30+ story mobile service tower and a 20+ story umbilical tower, and 97% of these units were recycled.

SpaceX also modified 4E to accommodate Falcon Heavy, which will be the world’s most powerful rocket (4.3 million pounds of thrust). With very minor additions, 4E is ready to launch Falcon Heavy. 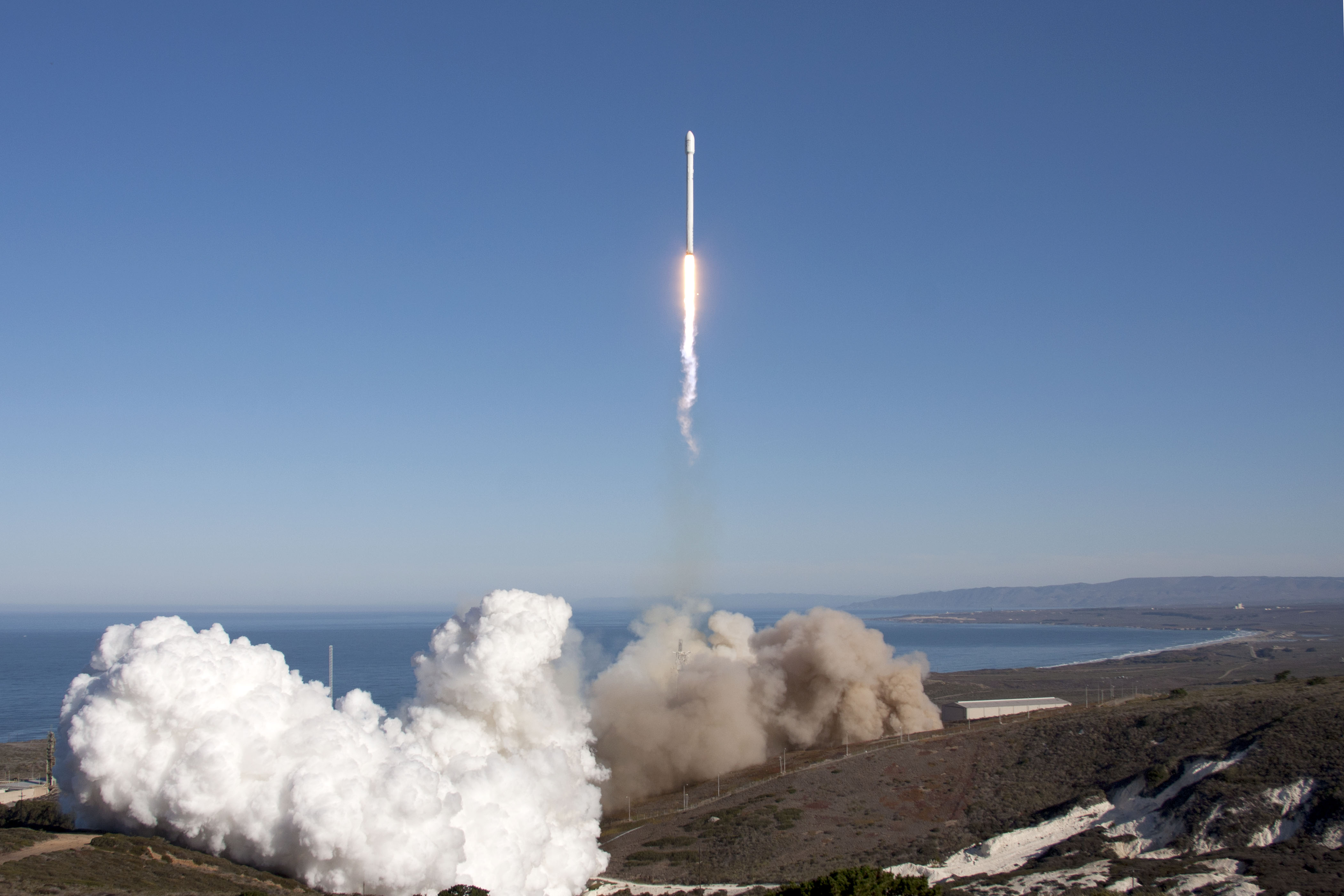 Today’s launch saw SpaceX make more progress toward reaching the goal of full first stage reusability by programming the rocke to guide itself to a powered landing back at its launch site.

As a secondary objective of the upgraded Falcon’s inaugural mission, the first stage was directed to re-light its engines twice after separating from the second stage. The first restart performed nominally and placed the rocket on the correct trajectory and orientation for re-entry into the atmosphere.

The second firing started out well, but, according to SpaceX CEO, without any aerodynamic controls, the rocket started spinning about its axis as the atmosphere got denser. This caused the propellants to be forced away from the intake valves and caused the stage to shutdown prematurely and the rocket to crash into the ocean.

Despite the failure, Musk says engineers now have the knowledge they need to create a reusable first stage and are on track to achieve stage recovery. Musk pointed out that the rocket would not have entered a spin and shutdown had it been outfitted with aerodynamic surfaces and landing hardware being developed to enable soft landing at the launch site.